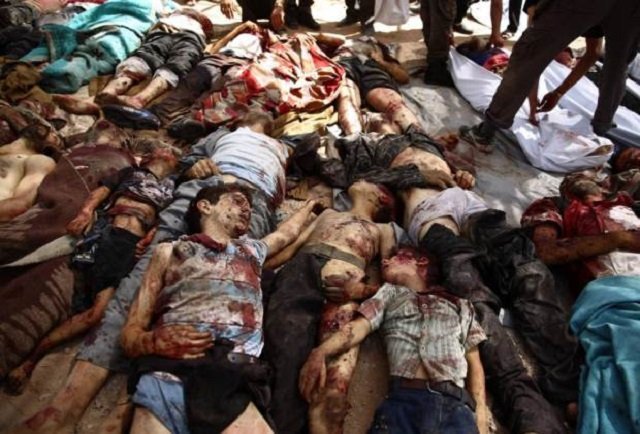 August 19, 2015 9:39 am 15
Tehran is the New Washington
On Syria Biden Got Away With Murder
How Obama’s Iran Deal Pushed Best Ally Israel Towards Russia

If you have been reading about the atrocities Assad has been committing against civilians, you surely would know that the Iran deal is a death sentence for Syria’s remaining women and children. If Assad is as bold when Iran is under choking sanctions, just imagine the monster he will become when the zealot Mullahs open their checkbook for his regime of terror courtesy of Barack Obama.

In response, just imagine what ISIS and the other Islamists are going to do to Syria’s minorities in retaliation for Assad crimes. If not today, then in 50 years. They will wait it out the way Khamenei has been waiting out since the Caliphate Abu Bakr.

The Iran deal is a death sentence to millions of civilians. It is about to unleash hell upon a region with hundreds of millions of angry Muslims.

The Iran deal is about to destroy any credibility America has accrued in the region that our diplomats have been building, brick-by-brick, over the last seventy years. Because when Muslims are done killing each other, the anger will not subside, nor will the danger to our homeland.

Obama has no clue what he is doing. Congress better hold him accountable for tomorrow’s crimes he is ignoring today.

Senator Chuck Schumer (D-NY) should start the debate over the Iran deal with a speech on the floor of the Senate entitled, “What if the president is wrong?”. Start by showing off the horrific pictures from the latest Douma massacre committed with Iranian complicity. That should open many eyes.

Anyone who believes Sunni Arab Muslims are going to let Shiite Farsi Muslims run them over in Syria, in Iraq, in Yemen, in Bahrain, in Kuwait, or in Saudi Arabia, have no sense of history. Obama is betting either Iran would behave, which if wrong is a disaster in the making, or that Iran would create an equilibrium of sort, which tells us how ignorant Obama is.

Either way, the Iran deal is a death sentence for Syria’s women and children who will become target practice for deadly Russian MiG sorties Putin is happy to supplement Assad with.

After the Iran deal is signed, Assad will begin to use forbidden chemical weapons to kill en masse. Who will stop him? Obama? Don’t make us laugh. Putin? He is an accomplice through and through. Kerry? He will hide for the next 18 months to avoid the questions the way Chamberlain hid after Hitler invaded Poland in 1939.

This Iran deal is a death sentence against helpless and hapless Syrian civilians the world has been watching Assad butcher over the last 4 years. How many Syrian civilians must die to satisfy the ego of Barack Hussein Obama?

The way we told you ISIS will be hard to defeat because of perception, we are telling you now that the Iran deal will unleash hell in the Middle East.

Blame Obama when you dust-off your bicycle to go to work.