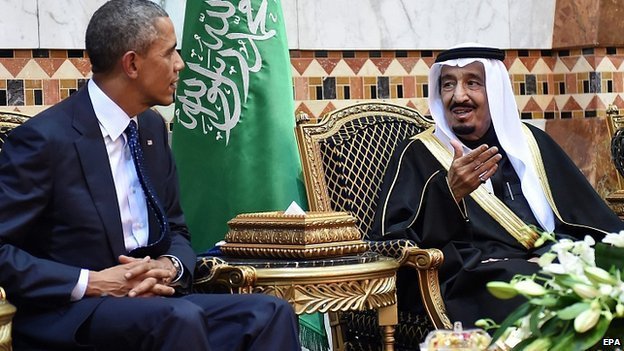 May 26, 2015 10:00 am
Just do the opposite
Iran vows to step up fight against Syrian civilians
Obama Legitimizes Iranian Regime, Predicts Long Syrian War

Three days ago, a suicide bomber blew himself up in a Mosque during Friday prayers. Twenty-four Saudi Shia died in the terror act. It is likely that Iran is behind the attack to stir turmoil as payback for Saudi interference in Syria and for their strikes against the Houthis in Yemen whom Iran is supporting. Obama, therefore, is providing guarantees to the Saudis. King Salman should call Obama’s bluff on those guarantees.

Iran’s response to a new Saudi determination to see Assad of Syria ousted is to stir trouble in the eastern province of Saudi Arabia where al-Khobar/Dammam cities are home to the largest Shia population in the Gulf.

Unlike Iran, the Saudi Government does not train or support suicide bombers. The Iranian Mullahs engineered this act of terror to point their fingers at the Saudis.

During the GCC Camp David summit, which Obama hailed as a great success, the U.S. President provided the Arab allies guarantees in writing that he would defend Saudi Arabia and any Gulf country from Iranian aggression in return for their support for his Iran deal. By support, Obama most likely meant “Just hush and accept it”.

Obama is also concerned his pursuit of the Iran deal may spark a nuclear arms race in the region he could not possibly blame George Bush for it. Obama intended for his security guarantees to nip any Saudi intention to acquire nuclear weapons from Pakistan.

Those guarantees Obama provided are untested. Therefore, and in light of the Qatif act of terror, King Salman should call Obama’s bluff now. We believe these guarantees to be Syria’s Red Line.

Since the Iran deal is due for signature at the end of June 30, Iran stirring trouble in Saudi Arabia today is an opportunity for King Salman to call Obama’s bluff with regard to his guarantees before he signs his Iran deal. We are calling it a ‘bluff’ because we believe Obama would never come to Saudi Arabia’s aid. His guarantees are as worthless as a $3 dollar bill.

King Salman should call Obama’s bluff by seeking to confront Iranian aggression in Saudi Arabia with a U.S. show of force off the coast of Iran and a stern warning for a ‘cease and desist’. If Obama is serious about protecting Arabs from Iranian aggression, this is the least he could do.

There is no better time and better way for King Salman to test Obama’s sincerity than now; by simply asking him to stand behind his guarantees immediately. The Iranian Qatif act of terror is heaven-sent.

After June 30, Iran is poised to receive some $150 billion from the U.S. that it would certainly begin using immediately to sow more chaos and terror in Saudi Arabia and to support the Assad regime.