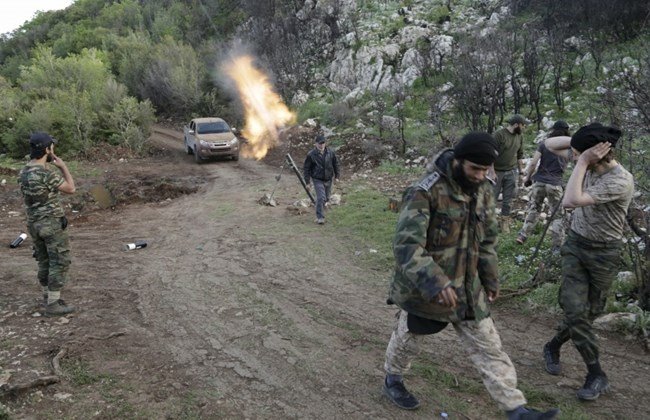 Iran vows to step up fight against Syrian civilians

May 1, 2015 3:16 am 0
Did Obama Order Benghazi Stand Down?
Syria has Become Obama’s Slaughterhouse
Assad for Nobel Prize in Chemistry

Both, Syria and Iran, have agreed to “intensify efforts to fight terrorism,” Syria’s defense minister said in Tehran, after a series of government defeats at the hands of rebel forces. Both countries label as ‘terrorists’ anyone that disagrees with the Assad regime including civilians.

In effect, Iran vows to step up fight against Syrian civilians.

Defense Minister General Fahd al-Freij, quoted by state news agency SANA, said key allies Damascus and Tehran were on the same page on how to tackle the fight against anti-government rebels.

“We agreed on the next measures to be taken together,” SANA quoted Freij as saying while on a two-day trip to Iran this week.

“It is important to intensify efforts … particularly after the escalation of recent months,” he added.

In the last month, Syrian government forces have suffered a series of setbacks, particularly in northwestern Idlib province.

A coalition of rebels including Al-Qaeda’s Syrian affiliate the Nusra Front now controls much of the province after seizing its capital, the key town of Jisr al-Shughur and a military base in the last few weeks.

“Syria’s enemies will spare no effort to continue their plot,” Freij said, in a reference to the rebels and their regional and international backers.

Syria’s regime and its allies refer to all those seeking to oust Bashar Assad as “terrorists” and accuse opposition supporters such as Turkey, Qatar and the United States of funding extremism.

Iran’s official IRNA news agency, meanwhile, quoted Defense Minister General Hossein Dehgan as saying “both sides agreed on the need for continuing bilateral cooperation to fight terrorism, extremism and violence and to restore regional stability.” Iran has been mostly the cause of terror, violence, and instability.

Iran has played a key role in bolstering Assad’s regime against an uprising that began with anti-government protests in March 2011 before spiraling into a war after a crackdown by authorities.

It has provided financial aid and military support, largely in the form of military advisers. Lebanon’s Hezbollah has also dispatched fighters to Syria to boost Assad’s forces.

Iran vows to step up fight against Syrian civilians