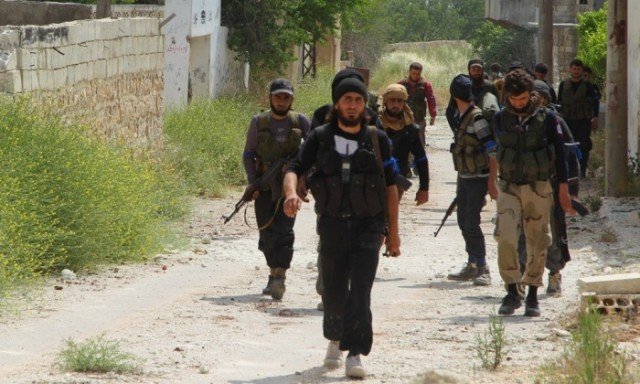 The loss of Mastouma base on Tuesday leaves only a few positions in the province in regime hands, which lies along the border with Turkey and neighbours the government stronghold of Latakia province on the Mediterranean coast.

Activists on the ground told  AFP:

“All regime forces have withdrawn from Mastouma, the largest regime base in Idlib, leaving it completely in the hands of opposition fighters,”

They added that the capture of the base followed a huge blast inside and heavy clashes, though the cause of the explosion was not immediately clear.

Al-Qaida affiliate al-Nusra Front, a key player in the “Army of Conquest” grouping that has seized much of Idlib in recent weeks, announced Mastouma’s capture online. “With the help of God, Al-Mastumah was completely liberated after al-Nusra Front stormed it from the south,” al-Nusra said on its official Twitter account.

Activists said regime troops withdrawing from the base were moving towards Ariha, now one of the last government bastions in Idlib. State television said the army was “taking defensive positions” outside Ariha, implying that army units had withdrawn from Mastouma itself.

The base’s capture comes after the rebel grouping, known in Arabic as Jaish al-Fatah, seized Idlib’s provincial capital on 28 March and the nearby city of Jisr al-Shughur last month. They had edged closer to Mastouma, where regime forces fled after withdrawing from Idlib city. There was no immediate toll in the capture of the military base.

To the north, fighting between Isis militants and government forces continued outside the historic town of Palmyra on Tuesday. “There are clashes at the western entrance of Palmyra this morning,” the provincial governor, Talal Barazi, told AFP.

Palmyra, whose archeological treasures are renowned worldwide, lies along major highways linking Damascus and Homs to the west, with the Syrian desert and the Iraqi border to the east.

To the east, an air strike on a village in Deir Ezzor province killed at least eight civilians, including three children.

Syria’s conflict began with anti-government protests in March 2011 but has evolved into a multi-front war in which more than 300,000 people have died.

Bashar al-Assad is Syria’s problem, not its solution
Syria is Columbia and Assad is Pablo Escobar
Bombing Iranian Targets in Syria is a Picnic
Syria News 1170 Syrian Revolution 1350