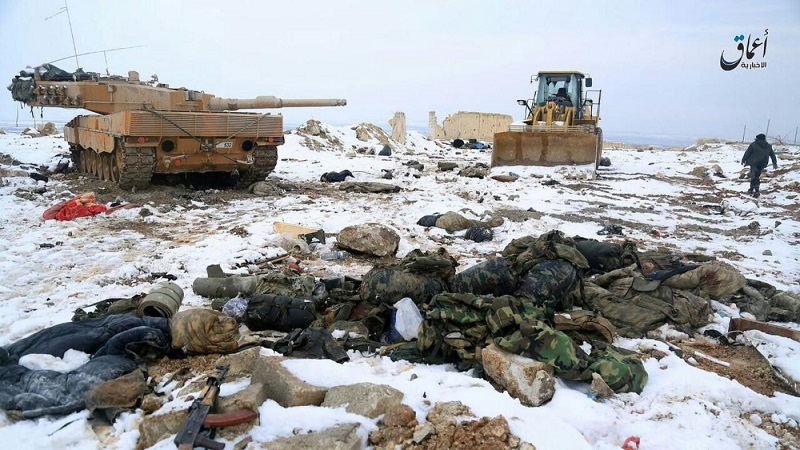 According to a Turkish official, the Assad air force killed 22 Turkish soldiers in an air strike in northeast Syria. The deaths mark a serious escalation in the direct conflict between Turkish and Russia-backed Syrian forces that has been waged since early February. Russian satellite imagery and technology is behind the death of so many Turkish soldiers. Putin sends Erdogan a message.

In addition to three Turkish soldiers killed in Idlib earlier Thursday, the casualties mark the largest death toll for Turkey in a single day since Ankara first intervened in Syria in 2016. At least 43 have now been killed in Idlib since the start of February.

The air strike came after a Russian delegation spent two days in Ankara for talks with Turkish officials on the situation in Idlib. The Assad offensive there has sent hundreds of thousands of civilians fleeing towards the Turkish border.

The offensive has also engulfed many of the 12 military observation posts Turkey has in Idlib.

The air strike came after Turkey-backed Syrian opposition fighters retook a strategic northwestern town from government forces on Thursday. The opposition military success cut a key highway just days after the government reopened it for the first time since 2012.

ALL OUT WAR BETWEEN SYRIA AND TURKEY

Turkey’s U.N. Ambassador Feridun Sinirlioglu told the Security Council on Thursday that Turkey was committed to upholding a fragile cease-fire agreement that Turkey and Russia reached on Idlib in 2018.

The Syrian government troops’ “deliberate attacks on our forces has been a turning point. We are now determined more than ever to preserve Idlib’s de-escalation status.”

The Assad opposition fighters seized the town of Saraqeb after intense bombardment by Turkish troops. Turkey and Russia support opposite sides in Syria’s brutal civil war. Ankara is backing the opposition and Moscow backing Assad.

Saraqeb’s loss is a big setback for Assad. It sits on the strategic M5 highway linking the northern city of Aleppo with the capital, Damascus. Syrian troops recaptured the last rebel-controlled section of the M5 earlier this month. Officials had hailed the reopening of the motorway as a major victory in the nine-year conflict.

The Syrian government’s military campaign to recapture Idlib province has triggered a humanitarian catastrophe and the war’s largest single wave of displacement. According to the United Nations, The Assad/Putin war has displaced almost 950,000 civilians since early December. Most have fled farther north to safer areas near the Turkish border, overwhelming camps already crowded with refugees in cold winter weather.

From inside Saraqeb, activist Taher al-Omar said the town is now under opposition control. He posted a video with a fighter saying the government forces “ran away like rats.”

The Assad forces launched a counteroffensive later Thursday under the cover of Russian airstrikes to try retake the town.

State TV later Thursday confirmed that insurgents have cut the highway. Fighting is ongoing in the area.

Erdogan said Thursday that, “The situation in Idlib has turned in our favor.”