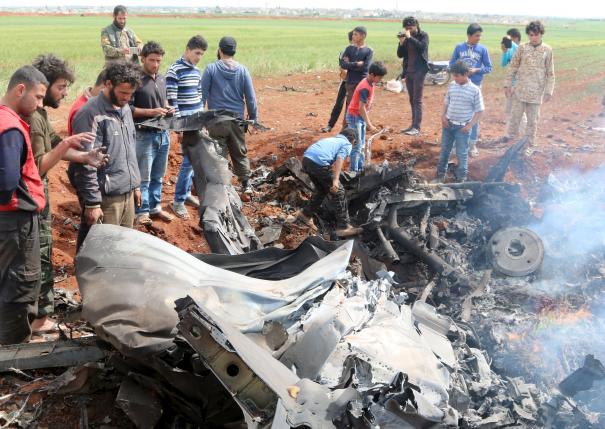 April 5, 2016 12:37 pm 1
Falafel interviews Abu Bakr al-Baghdadi
Agonizing fate of mothers in Syria
Pictures from Gaza and the Rest of the Muslim World

Rebels shot down a second Syrian warplane in less than a month on Tuesday and reportedly captured its pilot in an area near Aleppo where heavy fighting has erupted in recent days despite a cessation of hostilities agreement. A game changer weapon appears in Syria operated by mysterious elite forces inside the country.

The Syrian army said the jet was shot down with an anti-aircraft missile – the same type of weapon it says was used to shoot down a warplane in western Syria in March – but rebels accused Damascus of fabricating the claim, saying the plane was downed with anti-aircraft guns.

Foreign-backed rebels have long demanded anti-aircraft weapons to fight against devastating aerial raids by Syrian and, since September, Russian forces. But their backers, which include Western and Sunni Muslim regional states, are wary of delivering weapons that could fall into the hands of hardline groups.

The aircraft crashed in the Talat al-Iss highland south of Aleppo city, an area where al Qaeda-affiliated insurgents have come under heavy bombardment by Syrian and Russian warplanes since capturing it in recent days.

The pilot was seized alive by fighters from al Qaeda’s Nusra Front and taken to one of their headquarters in the area.

Videos circulated by pro-rebel accounts on social media showed what appeared to be the remains of the aircraft burning on an open patch of ground and surrounded by rebels. Some users separately posted an image of the man they said was the pilot.

Syria’s military confirmed that a plane on a reconnaissance mission had crashed after being hit by a surface-to-air missile. The pilot survived and efforts were underway to rescue him, it said. The Syrian civil war may have entered a period where game changer weapon appear to tip the balance against the Assad regime.

The activists also said the plane was mostly likely brought down by an anti-aircraft missile.

Rebels last downed a Syrian jet in the western province of Hama on March 12, when they also denied a Russian defense ministry report they had used an anti-aircraft missile. The activists said on that occasion a rebel group had used two heat-seeking missiles.

Ahmed al-Seoud, the head of a Free Syrian Army rebel group operating in northwestern Syria, said: “Not one faction in the opposition has surface-to-air missiles.”

Aerial supremacy has been a major advantage for the Syrian army that has been battling insurgents seeking to overthrow the psychopath Baschar al-Assad.

A fragile truce has held in Syria for over a month as the various parties try to negotiate an end to the five-year-old civil war.

But the truce excludes Islamic State and Nusra Front, and air and land attacks by Syrian and allied forces continue in parts of Syria where the government says the groups are present.