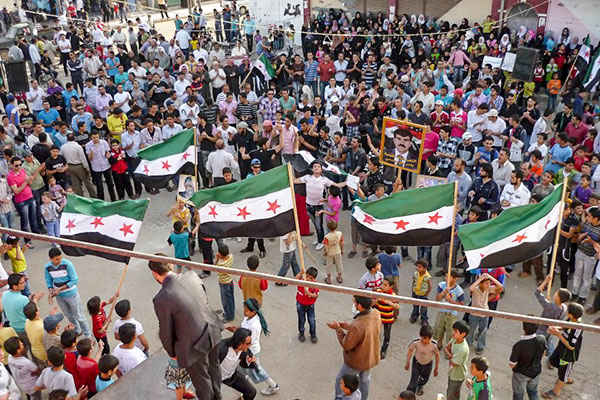 May 4, 2020 2:47 pm 0
Why Assad Dictated Only 19 Cases of Coronavirus?
Kurds Emptied ISIS Prison To Avenge US Abandonment
Collapse of the Assad Syrian Army is Imminent

Unknown gunmen killed nine Syrian policemen on Monday in a southern village close to the border with Jordan, state media and an opposition war monitor said. This is more evidence Syrians want Assad gone to be replaced by a government representing all the people of Syria.

A story has surfaced to the effect that The Kremlin may be looking at replacing Assad. His popularity among his own supporters is in steep spiraling downfall. Due mostly to picking a fight with his Alawite cousin Rami Makhlouf at the behest of his Muslim Sunni wife Asma.

Asma believes Rami Makhlouf’s popularity, mostly because of his charitable largesse, are a threat to her husband standing in his own Alawite community.

The attack occurred in the province of Daraa where Syria’s anti-government uprising began in March 2011. This is before morphing into a civil war where Assad has killed more than 600,000 people and displaced half the country’s population.

Daraa has become rife with assassinations and attacks targeting government troops who retook the area from rebels in July 2018. The people of Daraa are fighting for freedom from the brutal Assad rule.

Syria’s state news agency SANA said that the nine policemen were killed in the village of Muzayreeb. Armed gunmen attacked them while they were on duty. It listed the names of the dead policemen without giving further details.

Syrian activists monitoring the war reported that a group of unknown gunmen kidnapped the nine policemen before shooting them dead and leaving their bodies in one of the village’s streets.

No one claimed responsibility for the attack. Sleeper cells of the Islamic State group have been recently increasing their attacks in eastern Syria. But Daraa is home to liberal Syrians who would refute religious extremism in any form. The area known as Horan is infamous for its courageous men.