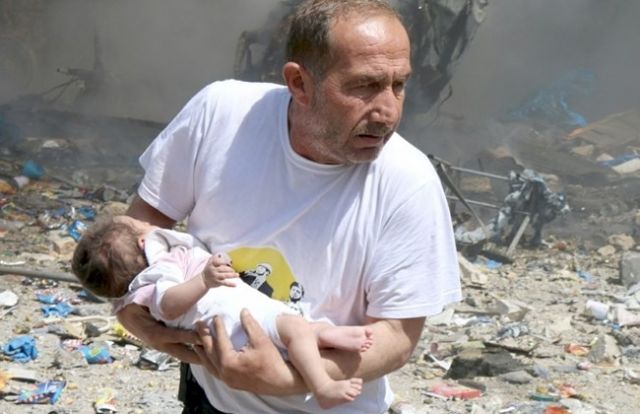 June 4, 2015 10:49 am 0
Iran thumbs its nose at the United States
Saudis Express Concern Over Iran Nuclear Deal
What Will Change Iran Situation?

BEIRUT: Iran has sent 15,000 fighters to Syria to reverse recent battlefield setbacks for Syrian government troops and wants to achieve results by the end of the month, a Lebanese political source has told The Daily Star.

The militia force, made up of Iranians, Iraqis and Afghanis, the source said, have arrived in the Damascus region and in the coastal province of Latakia.

The source said the fighters are expected to spearhead an effort to seize areas of Idlib province, where the regime has suffered a string of defeats at the hands of a rebel-jihadi coalition.

Gen. Qasem Soleimani, the commander of Iran’s elite Quds force, was in Latakia this week to shore up preparations for the campaign, the source said.

Soleimani promised a “surprise” from Tehran and Damascus.

“The world will be surprised by what we and the Syrian military leadership are preparing for the coming days,” Iran’s official IRNA state news agency quoted the general as saying Tuesday.

The regime of Syrian President Bashar Assad agreed reluctantly to the plan, which is expected to achieve two objectives, according to the source.

One is to reverse the falling morale of regime supporters in the wake of the battlefield losses and high casualties, while the second is to achieve successes by the end of this month, which coincides with a deadline for Iran and world powers to finalize an interim deal on Tehran’s nuclear program.

A reversal of the fortunes of Damascus, which is heavily dependent on assistance from Iran, would improve Tehran’s leverage as it deals with the post-June phase of negotiating settlements on several turbulent regional fronts, including Syria, the source said.

The regime’s forces have come under increasing pressure in recent months – in Idlib they were defeated in several locations by a seven-member coalition of rebels that included the powerful Ahrar al-Sham militia and the Nusra Front, Al-Qaeda’s affiliate in Syria.

Regime forces also withdrew from the central town of Palmyra last month after a short campaign by ISIS jihadis.

The U.S.-led coalition against ISIS has been heavily criticized for failing to blunt the jihadis’ advances in Palmyra, and more recently their campaign against rebel groups in Aleppo province.

A U.S. official said that more than 10,000 ISIS fighters have been killed by airstrikes in Iraq and Syria in nine months, offering a first body count for a campaign that has yet to halt their advance.

Deputy Secretary of State Tony Blinken’s figure came after a Paris conference on how to stop the extremists. The Pentagon earlier dismissed such counts as “simply not a relevant figure” in the fight against ISIS.

Speaking to France Inter Radio, Blinken said the airstrikes have been effective. “We have seen enormous losses for [ISIS],” Blinken said. “More than 10,000 since the beginning of this campaign. That will end up having an effect.”

But ISIS is now threatening the provincial capital of Hassakeh in northeastern Syria, and a Kurdish official warned the town could fall to the jihadis. Control of the city is divided between regime and the YPG.

“We do not believe the regime will be able to repel the attack if ISIS is really serious about making progress toward the city,” Redur Xelil, the YPG spokesman, told Reuters. “Half the city is under our control in the north and northwest and certainly when they reach the borders of our area they will receive a stiff response,” he said.

Syrian state TV also reported the five car bombings, but said they had all struck a prison still under construction.

“It is a serious attack. An attempt to make up for other losses,” Observatory director Rami Abdel-Rahman said.

In northern Syria at least 37 people, including 10 children, were killed in government barrel bomb attacks, the Observatory said.

In Tal Rifaat in Aleppo, 18 people were killed, including eight children, while in the rebel-held eastern neighborhood of Jubb al-Qubbeh in Aleppo, 11 civilians died, among them two children.

The New York-based group said it had led an investigation into three attacks in Idlib province, which killed two people and affected 127 others, and that chlorine was probably used in some, if not all of them.

A fact-finding team with the global chemical weapons watchdog the Organization for the Prohibition of Chemical Weapons is going to Syria to look into the allegations.

Moscow’s ambassador to the United Nations said his country backed moves to determine who is responsible. “We support the need to find those people who are behind it,” Vitaly Churkin said. But it remains unclear if a U.N. Security Council resolution, as proposed by the U.S., is the best way to provide answers, Churkin said.