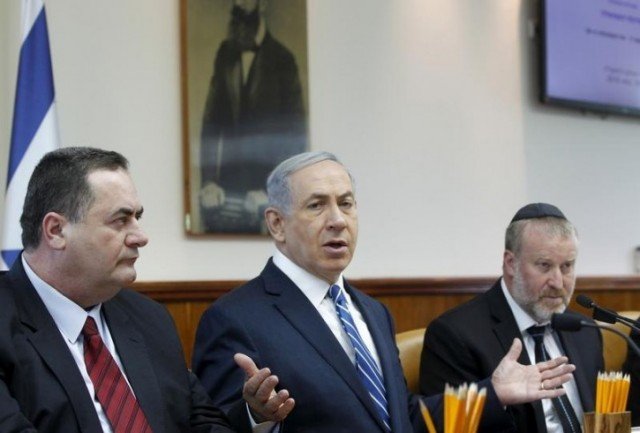 May 26, 2015 7:46 pm 0
Syria Bans Use of Foreign Currencies for Business Deals
Several Russian cruise missiles landed in Iran
Washington Needs To Take Iran`s President At His Word, He Promises `A World Without the United States and Zionism`

Israeli Prime Minister Benjamin Netanyahu warned on Tuesday that a nuclear-armed Iran would be “a thousand times more dangerous and more destructive” than the Islamic State of Iraq and Syria (ISIS) group, his office said.

His remarks came as political and technical experts representing Iran and world powers were to convene in Vienna ahead of a June 30 deadline for a deal over Tehran’s nuclear program.

“As we are meeting, the P5+1 talks are reconvening, and I’m afraid they’re rushing to what I consider is a very bad deal,” Netanyahu told U.S. Senator Bill Cassidy, in remarks relayed by the Israeli premier’s office.

Nuclear Iran 1000 times worse than ISIS is a fact only countries suffering from Iranian terror would fully understand.

“I see no reason to rush to a deal and certainly not a bad deal that paves Iran’s path to the bomb, but also fills Iran’s coffers with tens of billions of dollars to pursue its aggression throughout the Middle East and around Israel’s borders,” he said.

Netanyahu has been a fierce critic of the looming deal between Iran and world powers comprising the United States, Britain, China, France, Russia and Germany.

“We shouldn’t give Iran a path to nuclear weapons and billions of dollars to pursue aggression because of ISIS,” Netanyahu said of the group, which both the U.S. and Iran see as a threat.

This is why Nuclear Iran 1000 times worse than ISIS.

Iran has embarked recently on destabilizing Saudi Arabia by fomenting unrest through acts of terror in the oil-rich eastern province. Obama’s release of funds to Iran, as part of the Iran deal, would have a chilling effect on the region and would multiply terror exponentially.

Iran Slow Defeat in Yemen, Syria Shows Weakness of Tehran
Global March to Jerusalem? How About One to the Ruins of Homs Ayatollah Khameini?
What Assad Fears is What the US Avoids Like the Pest.. Go Figure
Support U.S. Allies 152