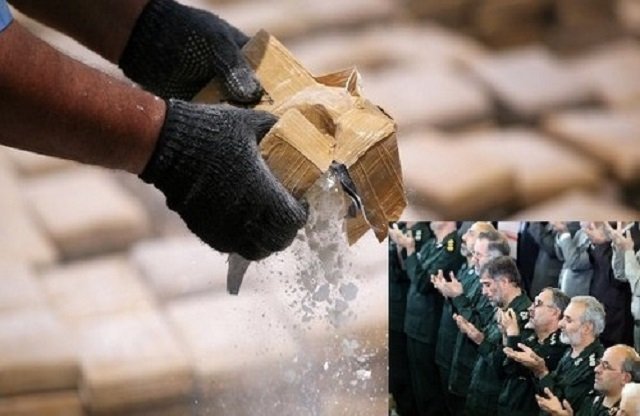 November 4, 2015 4:26 am 0
ARABS MUST DECIDE
The Arab slave of Iran
Pakistan to Iran, don’t mess with Arab countries

Source: Bloomberg View – by Eli Lake (Iran’s War on Drugs Shows How It Would ‘Help’ in Syria)

This week, in a little-noticed report, a U.N. official may have helped solve a riddle about Iran. Since President Hassan Rouhani’s election in 2013, state executions in Iran have spiked. How could a man who promised to free political prisoners preside over this reign of terror?

It turns out part of the answer, at least, is the global war on drugs.

According to the report, released by Ahmed Shaheed, the U.N.’s special rapporteur for human rights in Iran, 69 percent of the state executions of prisoners in the first six months of 2015 were for drug-related offenses. In 2014, when Iran executed 753 people (the highest total in Iran in 10 years), Shaheed said nearly half were killed for drug crimes.

There are many reasons the Iranian state detains, tortures and hangs its citizens. These range from offenses against God to publishing propaganda critical of the regime. But it’s the drug dealers who are being hanged the most, according to Shaheed. “The Government holds the view that the implications posed by drug-trafficking to the health and security of the Iranian people render drug-related offences ‘most serious’ crimes and, therefore, they deserve to be considered capital offences,” he wrote.

There are two important ironies in all of this. The first is that Iran’s revolutionary guard corps has itself been charged with engaging in narco-trafficking. In 2012, the Treasury Department designated Iranian Quds Force General Gholamreza Baghbani as a drug kingpin, accusing him of facilitating the shipment of heroin precursor chemicals from Iran to Afghanistan and of smuggling opium back into his country. The Argentine prosecutor who was mysteriously murdered earlier this year, Alberto Nisman, also has publicly accused Iran’s Lebanese ally, Hezbollah, of engaging in the drug trade in South America.

The second irony is that Iran has been widely praised by the United Nations Office on Drugs and Crime as a model partner in the war on drugs. The office had even proposed a five-year aid package for Iran’s anti-drug efforts. The British human rights organization Reprieve objected this spring, pointing out that the rate of executions for drug offenders had sky rocketed in Iran. As recently as June, the U.N. drug office’s representative in Iran generally praised Tehran’s efforts to combat narco-trafficking. He repeated the state’s line that its police had paid a heavy price in fighting the drug dealers.

Shaheed, the human rights rapporteur, is worried that the U.N. may end up perversely encouraging Iran’s hanging spree. In an Oct. 10 blog post, he wrote: “International agencies and states providing assistance to combatting drug trafficking should also ensure that their activities do not contribute to the execution of individuals for drug crimes.”

There is a lesson in all of this for the rest of the international community. It becomes even more urgent now that Iran will participate in Syria peace talks for the first time, on Friday at a meeting in Vienna. Just as elements of the Iranian state create the drug problem and other elements are praised for combating it, Iran bears a lot of responsibility for creating the conditions for the Syrian civil war it is now being asked to help resolve.

Iran, along with Russia, has supported Syria’s dictator, Bashar al-Assad, from the very beginning of the war. Assad’s main opposition then was locally organized citizens who sought the same kinds of freedoms Egyptians and Tunisians had demanded in the Arab Spring. Because Assad cynically targeted moderate forces, the opposition today has been overwhelmed by barbaric jihadists like the Islamic State and al Qaeda’s franchise, al-Nusra.

Assad, Russia and Iran have now presented themselves as the bulwarks against those barbarians in the fight for the future of Syria. But this was not always the case. In the first decade of the 21st century, Assad was happy to allow his territory to be used by al Qaeda to funnel fighters and arms into Iraq, back when their primary opponent was the United States. The same is true for Iran. Between 2011 and 2014, the U.S. Treasury Department publicly sanctioned three leaders of al Qaeda’s network in Iran. Treasury said the network facilitated jihadists’ travel to Syria and helped fund al Qaeda — with the knowledge of Iran’s authorities.

So now Iran is being courted to help end the bloodbath in Syria that it helped create. Don’t be surprised if the regime volunteers its services. Like the U.N. partnership against drugs, participation in the Syria peace process is another victory for a rogue state that seeks legitimacy from the community of nations it works so assiduously to undermine.

Expert: Iran has made no serious military effort against ISIS
Syria Real War Will Start After Assad
Should U.S. Destroy ISIS?
Iranian Terror 558