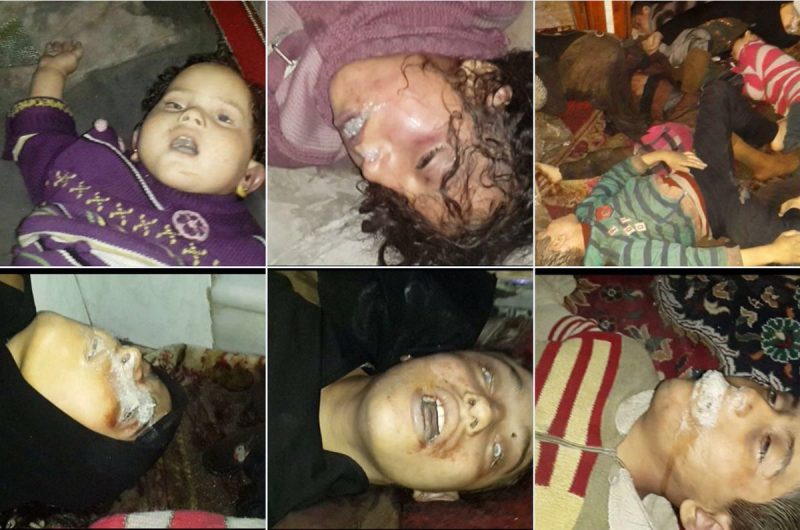 The US state department said it is monitoring the “very disturbing” reports, and that Russia – which is fighting alongside the Syrian government – should be held responsible if deadly chemicals had been used.

“The regime’s history of using chemical weapons against its own people is not in dispute,” said the state department.

Why would the U.S. State Department hold Russia responsible? It is highly probable the attack was ordered by Putin in retaliation for the U.S. Treasury sanctioning 24 Russian oligarchs and entities. Even when two superpowers duke it out, it seems the Syrian people are always the victims.

One day after the U.S. Russian sanctions were announced, Assad strikes innocent civilians with WMD. Coincidence? We don’t think so.

Assad is backed by the Putin and the Khamenei terror machines. Putin recently also used a toxic gas in an attempt to assassinate Sergei Skripal, an ex-KGB double agent.

What will Trump’s response be to this latest crime against humanity? At TFS, we expect him to just play golf like Barack Obama did.

It was after Barack Obama infamous “Red Line” that John Kerry conspired with the Russians to fool the world into believing Assad sarin gas can be removed through diplomacy. The Russians, of course, used the naivete of John Kerry to protect Assad from an American aerial attack.

We got ‘100 percent’ of chemical weapons out of Syria

Someone should tell Kerry that he got fooled 100% by Assad and Putin for negotiating an agreement both he and Barack Obama knew it would never be honored.

This deadly sarin gas attack is on both John Kerry and Barack Obama.