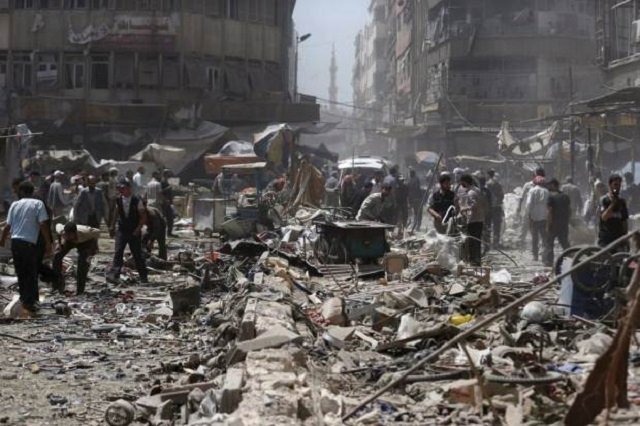 Human Rights Watch on Thursday urged the United Nations to impose an arms embargo on the Syrian government after deadly air strikes on a rebel town killed nearly 100 people.

The New York-based group said the Sunday attack on Douma outside Damascus showed the Syrian government’s “appalling disregard for civilians.”

The series of air strikes on the town in the Eastern Ghouta region killed mostly civilians, with several of the raids hitting a crowded marketplace.

“This latest carnage is another reminder — if any was still needed — of the urgent need for the Security Council to act on its previous resolutions and take steps to stop indiscriminate attacks,” HRW deputy Middle East director Nadim Houry said.

Activists monitoring the war on the ground put the toll in the attack at 96 dead, though HRW reported 112 people had died, citing local officials.

The attack was among the deadliest government assaults in the conflict, which began in March 2011.

It came almost two years after a chemical weapons attack on Eastern Ghouta that according to the United States killed 1,400 people.

Much of the international community blamed Syria’s government for that attack, though it denied responsibility.

HRW noted that Douma, as well as other parts of rebel bastion Eastern Ghouta, are regularly targeted in regime air strikes that disproportionately kill civilians.

The group also criticized rebels operating in the area for firing indiscriminately at civilians in nearby government-held territory, including the capital Damascus.

HRW said the U.N. Security Council was failing to enforce its own resolutions calling for an end to attacks on civilians and the indiscriminate use of weapons in crowded places. HRW urges Syria arms embargo to be enforced.

It urged the U.N. to monitor such attacks, attribute responsibility for them and sanction those to blame.

“How many more lives will be lost before the Security Council enforces its own words?” Houry said.