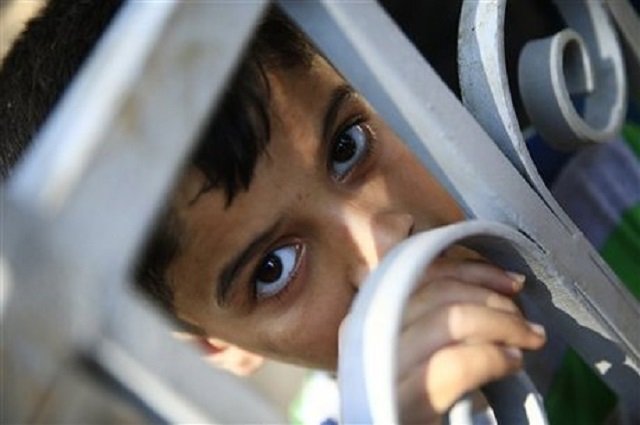 Thousands of Syrians, some still bearing the scars of war on their faces, landed at the main Greek port of Piraeus early Thursday, hoping to continue their journey to safety towards northern Europe. This is but one ship that shows the plight of Syrian refugees crossing into Europe.

Some 2,700 people — mostly Syrians with some Afghans — poured onto the dock, relieved to be a step closer to their destination but anxious to move on. Their plight is a story to be told.

“We stayed four years in the war in Syria. My best friend was ripped to pieces (in a bombing)… anything is better than that,” said Lamia, a 21-year-old Kurdish woman from Aleppo who wore Western clothes.

They traveled with their extended families — from a dozen up to 30 strong — with small children as young as a few months old.

The scars from Syria’s pitiless civil war are etched on their faces.

One girl not more than 11 years old had a half-burned face. Two other teenage girls aged around 14 bore shrapnel scars.

The battered group faced a second ordeal upon crossing the Aegean Sea from Turkey. On the islands of Kos, Lesbos, Rhodes, Leros and smaller isles, they were frequently forced to sleep outdoors, with minimal access to hygiene, and had to rely on volunteer groups for sustenance.

Lamia said that on Leros, hotel owners tried to take advantage of her group. Their plight is etched in these words:

“We stayed eight days sleeping in the street. We didn’t have enough money, every hotel we asked wanted 100 euros ($110) per person,” she said.

The government chartered Thursday’s ferry — the Eleftherios Venizelos — after the arrival of thousands of migrants pushed local authorities to the brink.

Police last week used violence to prevent a stampede on Kos, while on Lesbos, scuffles broke out between migrants eager to get off the island as fast as possible.

According to the U.N. refugee agency, in the last week alone, 20,843 migrants — virtually all of them fleeing war and persecution in Syria, Afghanistan and Iraq — arrived in Greece, which has seen around 160,000 land on its shores since January.

From there they travel northwards through Macedonia and Serbia, with many hoping to reach relatives in Germany, the Netherlands and Sweden.

But the desired route may not be open for long.

Hungary is hurriedly completing a wire fence on its border with Serbia by the end of August, and Macedonia on Wednesday said it had no more trains to handle the exodus north.

Greek media on Thursday reported that the destination of the Eleftherios Venizelos nearly sparked a diplomatic spat between Athens and Skopje, when it became apparent that the ship was heading for Thessaloniki.

A plan to put the Syrians on buses to the Macedonian border sparked angry phonecalls from Skopje, officials in the northern city told AFP privately. The ferry was subsequently rerouted to Athens.

But in the mixup, it was the refugees who paid the penalty.

Having originally bought 40-euro tickets for another ferry to Athens, Lamia notes, they paid another 60 euros for the trip to Thessaloniki only to end up in Athens.

“They did it in Turkey, they did it on Kos, they will do it in Athens.”

The plight of Syrian refugees traveling through Europe for safety and security.