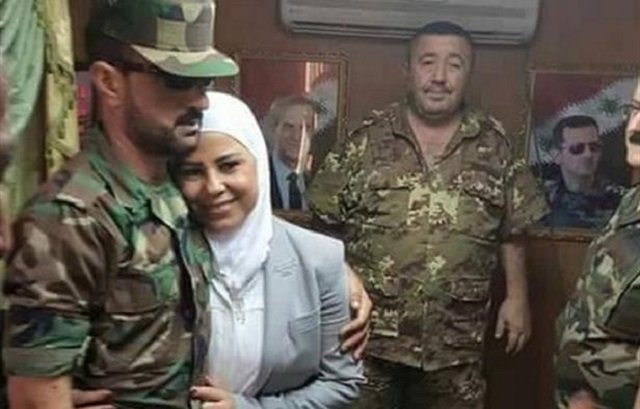 The Lebanese NOW news website published an interesting story it titled, “Syria minister fired after seen hugging regime hero” in which a lady minister was fired for taking a picture hugging an Alawite hero of war, Colonel Suheil al-Hassan, who could rise to rival Assad because of his popularity.

In Syria, Syrians are only supposed to pour their love unto the murderous Assad family. If you show any respect or love for another Alawite who could rival the Assads, you are doomed. Is Assad afraid of Colonel Suheil al-Hassan?

Our guess here at TFS, al-Hassan won’t live long. He will die from a bullet to the head shot from behind while on the battlefield. Assad will kill anyone who could rival him and that includes the very same people, in Colonel Suheil al-Hassan, who are saving his ass.

Is Assad afraid of a rival rising to take his place among the Alawite community? You bet he is. In Syria, Assad is the glass dirty ceiling. Everyone else should be below it. That includes Alawite heroes like Suheil al-Hassan.

This is why he forged ISIS. This is how defunct and sick the Assad family is.

Below are the most important portions of the NOW article.

Syria’s minister for social affairs has been dismissed from her post only hours after a picture of her embracing Suheil al-Hassan, a top army commander who has achieved celebrity status among regime supporters.

The state SANA news agency reported Thursday that Kinda al-Shammat—who has been social affairs minister since early 2013—had been replaced by Rima al-Qadri, while Syria’s commerce minister had also been sacked.

Shammat’s firing comes only hours after a picture of her hugging Tiger Force commander Suheil al-Hassan—who is also known by his nickname the “Tiger”—made the rounds on social media.

The ‘Tiger’ is a beloved figure and everyone loves to take their picture with him, and Minister Kinda [al-Shammat] was expressing her love and [pride] for the ‘Tiger’,” the “Lovers of Colonel Suheil al-Hassan the Tiger” page claimed in a post Wednesday evening.

Hassan has rose rapidly through the ranks of the Syrian army during the course of the civil war in the country, gaining prominence in 2013 when he was tasked with forming his own crack elite unit to conduct offensive operations.

His “Tiger Forces” gained fame for relieving regime troops besieged in the Aleppo Central Prison in early 2014 and retaking the Shaer gas field later that year from ISIS.

The battlefield successes boosted Hassan’s media profile, with a cult of personality emerging around the Syrian officer who has been feted by regime supporters as a hero that does not lose battles, despite recent reverses in the Idlib province and adjacent Al-Ghab Plain.

In a December 2014 report, leading French daily Le Monde postulated that Hassan’s celebrity status—especially among Syrian Alawites—could even put him in a position to rival Syrian President Bashar al-Assad.