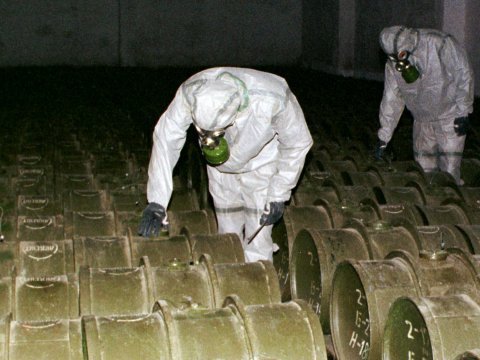 US Doubting Syria Gas Use

December 26, 2012 11:35 am 0
For Assad to Win This War
Syria: relief convoys heading to Homs attacked for second day running
I interviewed Bashar al-Assad about Syria’s civil war. He’s still too delusional to end it.

The US officially drowned the Syrian gas claim made by al-Jazeera with noise. It seems the US doubting Syria gas use is not that credible.

Let’s step back and calculate logically this mystery.

We know what A stands for: Assad kills innocent civilians.

Further, we know what B stands for: Believe Assad will do anything to remain in power.

And C stands for: Chemical Weapons, which Syria  possesses in large quantities.

We know what M stands for: Moving and mixing Assad’s chemical weapons have started and the US officially brought it to our attention.

We know what Q stands for: Qatar helping the Muslim Brotherhood ascend to power in Syria. They will stop at nothing to reach their goals.

Moreover, we know what S stands for: Substantial gains by the rebels lately, which induces Assad to use WMD to stop them.

We know what Y stands for: YouTube videos showing rebels either under gas attack or having an Asthma attack.

YOU BE THE JUDGE

Does A+B+C+M+P+Q+S+Y equal to a definitive answer that Assad used chemical weapons? Or does it shed doubt because of Qatar’s ulterior motives, which was the first to report it?

Is Obama lying to the public because Putin has not said “Da” yet? Or is the Muslim Brotherhood deceiving the West in order to replace Assad?

At least with the US doubting, the pressure is on the Syrians fighting to produce more conclusive evidence, a point we will drive very hard today when we speak to the FSA.

If not, the MB would have blemished Syrians fighting. Crying wolf makes you inconsequential.

Meanwhile,we stand firmly behind the belief that the destruction of Syria will have dire consequences for many years to come for the whole region, something Putin is betting on to continue with the Soviet-style destabilization of the Cold War.

US Doubting Syria Gas Use