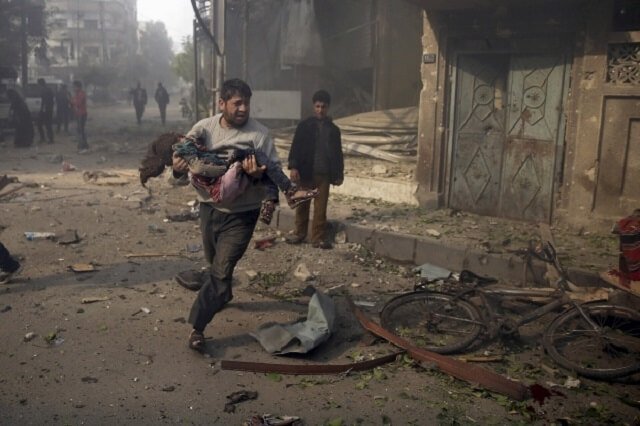 At least 18 civilians were killed and 40 wounded in Russian air strikes on a rebel-held town in northwestern Syria on Sunday, a monitoring group said. Putin is driving Syrian refugees towards Europe.

The strikes hit the Idlib province town of Ariha, which is controlled by the Army of Conquest, a rebel alliance of mainly Islamist groups, including al-Qaida affiliate al-Nusra Front.

Several areas of the town were hit and rescue operations are under way with several critically wounded. The Army of Conquest alliance seized Ariha in May after heavy fighting with regime forces.

A longtime ally of Damascus, Moscow escalated its support to psychopath Baschar al-Assad on September 30 with an air campaign aimed at bolstering regime positions and backing ground operations by Syrian government troops.

Moscow says it targets the Islamic State group and other “terrorists”, but critics accuse it of targeting moderate and Islamist rebel fighters more than IS.

By attacking civilians, Putin is driving Syrian refugees towards Europe as well.

Syria’s neighbors have charged that Russian planes have strayed into their airspace on multiple occasions during the campaign.

Russia carried out heavy raids in northern Syria this week after Turkey downed one of its jets in the area.

Turkey claims the warplane strayed into its airspace and ignored repeated warnings to change course, but Russia has insisted it did not cross the border.

The incident has led to a sharp deterioration of relations between Ankara and its largest energy supplier.

The pilot of the Russian plane was shot dead by rebels as he parachuted down after ejecting, but his navigator was rescued by Russian and Syrian special forces.

The pilot’s body is to be handed over to a Russian representative after being retrieved from Syria, Turkish Prime Minister Ahmet Davutoglu said on Sunday.

Russia is itching to engage in military skirmishes across the region for two reasons: As a warning against Arab countries for their war against Assad, and to force oil prices to go up. One way of doing it is to violate air space of other countries and hope they respond militarily.

Fighting on Three Fronts, the Regime Implosion is Inevitable
How Syrian Refugees Are Contributing in Europe
After Paris Attacks, Europe is at Putin’s Mercy
Putin Terror 436