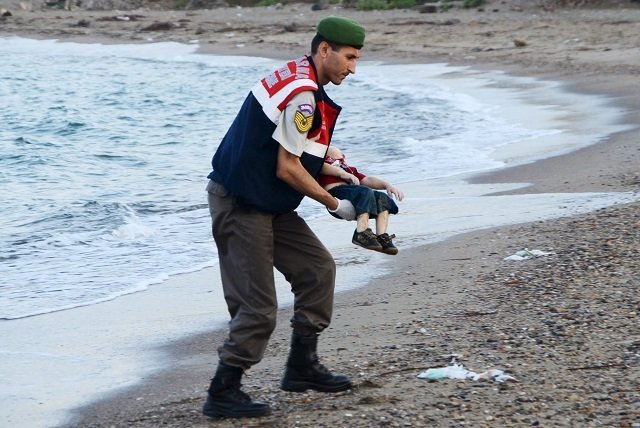 Dead Syrian Toddler May Save Thousands of Syrian Refugees

There has never been an awakening of global consciences that went to sleep on Syria as the awakening the image of a 3-year boy dead Syrian toddler produced. The boat that was supposed to transport Aylan Kurdi to safety instead caused his early death.

The expression of power demonstrated by millions of people on the Social Media jerked politicians across the world from their slumber. They could no longer ignore Syria after seeing the image of Aylan Kurdi laying still on a Turkish posh beach. The reaction has been swift across the board.

Just two weeks ago, a truck in Vienna was discovered with 71 Syrian bodies inside. But because there were no images of dead refugees published, the world just shrugged its shoulders. However, who could ignore the image of a dead Syrian toddler drowned and washed up on a beach?

The image of a Aylan Kurdi, a dead Syrian toddler, may yet save tens of thousands of Syrian families. How is that for being an angel sent to save the Syrian refugees by sacrificing his own life?

At TFS, the image of Aylan lying dead reminds us of a cave with millions of sleeping bats that suddenly all bolted together into the open sky. This is how the world responded to Aylan Kurdi’s death. Suddenly, the world began to recover the conscience it lost in the midst of a savage war.

How and why it happened should be a study case for sociologists. How could the world just go asleep with regard to the Syrian refugee tragedy by ignoring it for so long? How could the world simply become so dehumanized at the sight of watching others suffer? Then came the little angel Aylan to stir our conscience like tectonic plates stir an earthquake.

Will the policies emanating from every Western country that ignored the plight of the Syrian people for too long change to accommodate them? Will the Arab Gulf countries show any compassion towards other Muslims by giving the Syrian refugees a temporary country and a temporary safe future?

Will the heartless Barack Obama grow a heart and stop empowering the terrorists in Tehran causing the Syrian refugee crisis?

These are questions that will be answered soon. Unless America, Europe, and the rich Gulf countries keep paying the Syrian refugees lip service as usual.

Post your own personal cases on Twitter the way Rana Kabbani did. With every post, show Aylan’s dead Syrian toddler picture lying on the beach to remind the world that the lives of the Syrian refugees matter.

My mother, now 80 + a widow, denied entry into #Britain tho she is my dependent + requires NOTHING from the state. pic.twitter.com/HYWUMjXQ0m

Dead Syrian Toddler May Save Thousands of Syrian Refugees