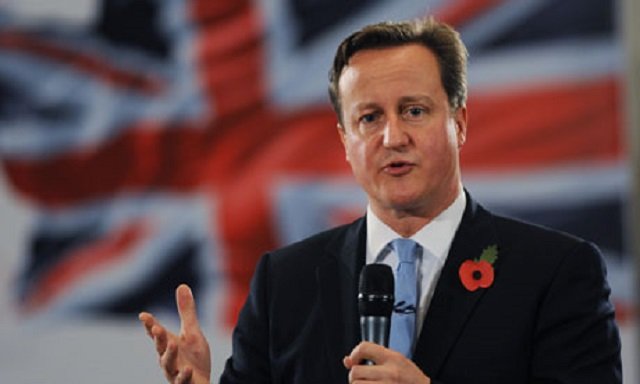 Prime Minister David Cameron agreed on Friday that Britain would take in “thousands more” Syrian refugees, after an outpouring of emotion over the image of a Syrian toddler lying dead on a Turkish beach put him under pressure to act.

Cameron gave no precise figures, but a spokeswoman for the U.N. refugee agency told reporters in Geneva that the British move would improve the lives of 4,000 Syrians.

As Europe seems at a loss to cope with thousands of migrants and refugees from the Middle East and Africa seeking safety or better lives on the continent, many at home and abroad had accused Cameron’s government of being uncaring and inflexible.

Several of his own Conservative legislators and the human rights chief of the Council of Europe urged Britain to take in more refugees.

“Given the scale of the crisis and the suffering of people, today I can announce that we will do more in providing resettlement for thousands more Syrian refugees,” Cameron told reporters in Lisbon after meeting his Portuguese counterpart.

About 5,000 Syrians who made their own way to Britain since the start of the war in their country have been granted asylum, and another 216 were brought to Britain under a U.N.-backed relocation scheme.

“We will accept thousands more under these existing schemes and we keep them under review,” Cameron said, adding that the government would speak with humanitarian organizations and announce further details next week.

Other European countries such as Germany and Sweden have taken in far more refugees than Britain in recent times, and London declined to take part in a proposed EU scheme that would allocate quotas to member states.

Germany alone expects 800,000 people to file for asylum this year. About 25,000 people applied for asylum in Britain in the 12 months to March, of whom two-fifths were granted some form of protection.

Cameron’s announcement concerned only Syrians, the focus of popular anguish after the widespread publication of photographs of Aylan Kurdi, the Syrian toddler who drowned with his brother and mother as the family tried to cross from Turkey to Greece.

“We will continue with our approach of taking them (Syrian refugees) directly from refugee camps. This provides them with a more direct and safe route to the United Kingdom rather than risking the hazardous journey which has tragically cost so many of their lives,” Cameron said.

Cameron had previously insisted that Britain was already doing its bit, not least by sending aid to Syrian refugee camps in the Middle East and dispatching the Royal Navy to the Mediterranean to help rescue migrants from unsafe boats.