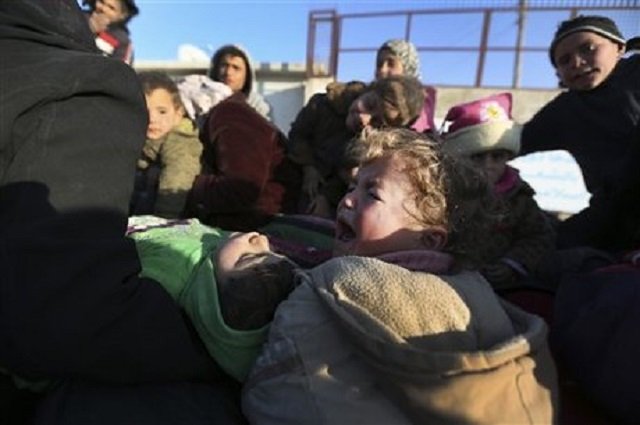 Wealthy countries have resettled only a fraction of the nearly five million refugees who have fled Syria, Oxfam said on Tuesday, urging them to step up and do their share. Rich countries ignore plight of Syrian refugees.

The British charity called on wealthy countries to resettle at least 10 percent of the 4.8 million Syrian refugees registered in the region surrounding the war-ravaged nation by the end of the year.

So far, rich countries have pledged few than 130,000 resettlement spots, and only around 67,100 people — a mere 1.39 percent of the refugees — have made it to their final destinations since 2013, Oxfam said.

The charity issued its report ahead of an unprecedented UN-hosted conference in Geneva on Wednesday, where countries will be asked to pledge resettlement spots for Syrian refugees.

As the brutal conflict enters its sixth year, most of the people who have fled are located in Syria’s immediate neighbors such as Turkey, Lebanon, Jordan and Iraq.

But as the war has dragged on and conditions have worsened in the surrounding states, Syrians have increasingly set their sights on Europe, accounting for most of the more than one million migrants who risked their lives crossing the Mediterranean last year.

They are also believed to be heavily represented among the more than 7,500 people, including many children, who have died trying to make the crossing since 2014.

Wednesday’s conference, which will be opened by UN Secretary General Ban Ki-moon, will aim to ensure “global responsibility sharing” for the crisis sparked by Syria’s brutal conflict, which has claimed more than 270,000 lives.

“To date the response to calls of increased resettlement of vulnerable refugees has been disappointing, and the conference is an opportunity for states to mark a change of course,” the Oxfam report said.

The charity said its analysis showed only three of the world’s wealthy countries — Canada, Germany and Norway — had pledged more resettlement spots than what was considered their “fair share” according to the size of their economies.

Five other countries, Australia, Finland, Iceland, Sweden and New Zealand had meanwhile pledged more than half of their fair share, while the remaining 20 nations included in the analysis fell far short, Oxfam said.

Thus, France had only so far pledged to take in 1,000 Syrian refugees, or only four percent of the nearly 26,000 considered to be its fair share, the report said. Rich countries ignore plight of Syrian refugees suffering under heinous conditions.

The United States, which has resettled 1,812 Syrian refugees and said it will take in 10,000 more, has meanwhile pledged just seven percent of the nearly 171,000 considered to be its fair share, it showed.

The Netherlands also stood at seven percent, Denmark at 15 and Britain at 22, Oxfam said.

“We need to show Syrian people that ‘solidarity’ is an action, not a sound-bite,” Oxfam chief Winnie Byanyima said in a statement.

“Countries with a strong economy, good services and developed infrastructure can immediately resettle 500,000 refugees between them — if they chose to,” she said.

Byanyima said that in Lebanon, one in five inhabitants is a Syrian refugees, while they constitute 10 percent of the population in Jordan, which counts a refugee camp as its fourth largest “city”.

“These countries have fragile economies and weak infrastructure. They can no longer shoulder this responsibility virtually alone,” she said, insisting that the Geneva conference “should result in urgent solutions, offering people safe and legal routes to a welcome in third countries”.