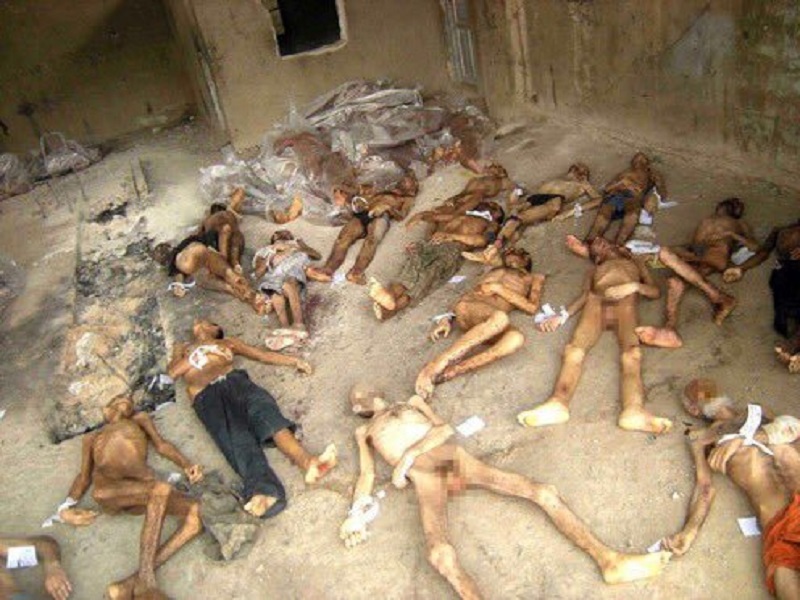 August 8, 2019 5:13 pm 0
The Alawites should invite the US to strike Assad
Striking ISIS and Assad
Barack Obama Is Complicit With Assad Siege of Madaya

U.N. reports suggest the Assad regime has detained, abducted or disappeared more than 100,000 people during the eight-year conflict. With ISIS gone brutality of Assad takes center stage at the United Nations.

Rosemary DiCarlo, Under-Secretary-General for Political Affairs, urged all parties to heed the Security Council’s call for the release of all those arbitrarily detained and to provide information to families about their loved ones as required by international law.

NO ONE EVER VISITED SYRIAN DUNGEONS OF DEATH

She told the council that the U.N. can’t verify the figure of more than 100,000 because it has been unable to gain access to places of detention and detainees in Syria. She said its information comes from accounts corroborated by the Commission of Inquiry on Syria authorized by the U.N. Human Rights Council and human rights organizations since the conflict started in 2011.

DiCarlo also reiterated U.N. Secretary-General Antonio Guterres’ call for the Syria conflict to be referred to the International Criminal Court, saying accountability for serious violations of international human rights and humanitarian law “is central to achieving and maintaining durable peace in Syria.”

DiCarlo spoke at an open meeting following the Security Council’s unanimous approval in June of its first-ever resolution focused on the many thousands of people missing in conflicts around the world. The International Committee of the Red Cross, which was mandated by the 1949 Geneva Conventions to address and oversee the issue of missing persons in conflicts, said it registered over 45,000 missing cases in countries around the world in 2018 alone.

US CALLED FOR THE SECURITY COUNCIL MEETING

The council meeting, initially requested by the United States, offered a rare opportunity for the U.N.’s most powerful body to hear directly from families of the detained.

Dr. Hala Al Ghawi and Amina Khoulani, who both campaign for freedom and justice for Syrian detainees, criticized the council for its failure to end the war and urged its deeply divided members to adopt a new resolution to pressure all warring parties to reveal the names and whereabouts of all those detained — and release all those arbitrarily detained.

Russia and Syria consider anyone opposing the brutal rule of Assad a terrorist. Even innocent women and children who died after Assad gassed them with sarin Russia considers terrorists.

Al Ghawi said she left Syria at the end of 2011 after her husband was detained and held in a cell “so tiny that he didn’t have space to sit down.” The brutal Assad regime released him but she said her brother, father-in-law and some cousins remain missing.

Al Ghawi said many medical colleagues were also detained by the Syrian government for helping wounded protesters, and “some of them were killed under torture while in detention.”

“As families, we have suffered enough and I’m here today to urge you to act,” she said.

Khoulani, whose three brothers were taken by the Syrian government eight years ago, said they all died in detention and she herself was imprisoned for six months, “arrested by the Air Force Intelligence Branch for my peaceful activism.” Her husband was detained in a military prison for 2 1/2 years, and “we were both lucky to survive, but many others weren’t as lucky.”

The United Nations Security Council has utterly failed Syrian detainees and their families. It’s your responsibility to protect Syrians from a system that kills, tortures, and illegally detains its own citizens, in systematic violation of international law.

We have repeatedly stated that it is unacceptable to politicize humanitarian and human rights issues. However, we are once again hearing accusations against one of the parties, the official authorities in Damascus, while outright terrorists … are being presented as innocent victims.

Russia and Syria consider anyone opposing the brutal rule of Assad a terrorist. Even innocent women and children who died after Assad gassed them with sarin Russia considers terrorists.

Syrian Charge d’Affaires Louay Falouh said the U.S. and United Kingdom had “no right” to call for a council meeting. He accused both of of imposing “unilateral coercive measures” on the Syrian people, adopting “immoral conduct” and exploiting the humanitarian issue.

British Ambassador Karen Pierce shut him up by saying that nine countries on the 15-member council called for the meeting. None objected.

Pierce said Syria had not answered the most critical questions and again asked:

Would the Syrian authorities please provide a list of who is detained, where they are detained and, for those people who have died, their burial sites? And will they allow … access to the detention sites?