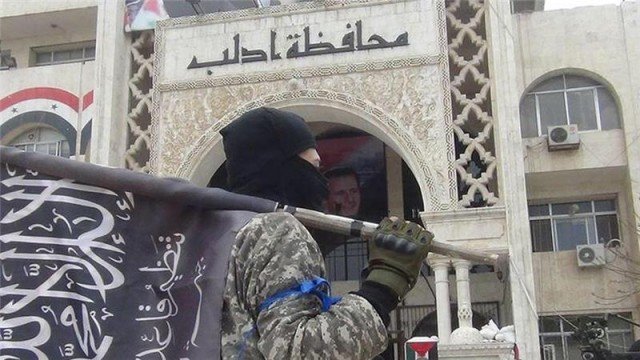 RPS Note: This may just be a political ruse by the Nusra Front leader to appease the Alawites and to peel them from the Assad regime. The Alawites of Syria should have called for the U.S. President to intervene in Syria after Assad attacked civilians with sarin gas. Had they done so, the Nusra Front leader and AQ would not feel safe from American wrath. Isolationism is a two-way sword. Al-Golani did not mention the Christian communities, which is not comforting at all.

Abu Mohammad al-Golani says al-Qaeda’s Syrian branch only fighting “those who attacked us and murdered our people”.

The Nusra front leader of al-Qaeda’s Syria branch has said the group will not target the country’s Alawite minority despite their support for Bashar al-Assad’s government.

Abu Mohammad al-Golani, leader of the Nusra Front, made the remark in an exclusive interview to Al Jazeera.

“The battle does not end in Qardaha, the Alawite village and the birthplace of the Assad clan,” he said in the interview which aired on Wednesday.

“Our war is not a matter of revenge against the Alawites despite the fact that in Islam, they are considered to be heretics.

“Our fight is strictly with those who attacked us and murdered our people.

“Our faith is based on mercy and our noble traditions. We are not murderers. We will not hurt them or target them, the Druzes or anyone else.”

Golani said his group was aiming to capture Damascus and the fall of Assad would happen quickly.

“We will continue our focus on Damascus and on toppling this regime,” he said. “I assure you, Assad’s fall won’t take a long time.”

Golani also said the Lebanese Shia Hezbollah movement, which backs Assad, knew its fate was linked to the Syrian president and its efforts to save him were useless.

The Alawites of Syria should have wished the U.S. President intervened in Syria after Assad attacked civilians with sarin gas. Had he done so