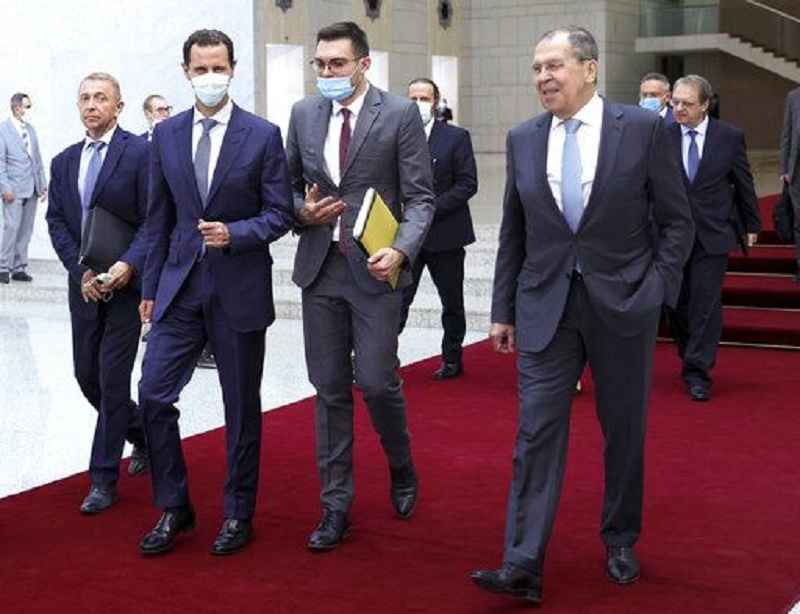 Assad and Putin Are Planning for a Biden Era

Assad of Syria said on Monday he wanted to expand business ties with Russia to help Syria cope with new U.S. sanctions that are crippling its economy. They  threaten to undermine military gains Damascus achieved with Moscow’s help. Reality is Assad and Putin are planning for a Biden era.

Lavrov told a news conference Syria needed international help to rebuild its economy. Borisov said Russia was helping Syria to fix its power plants but said oil output could not resume as the fields were in areas outside government control.

Putin tried and failed to regain control of the oil fields when his mercenary outfit the Wagner Group attacked U.S. troops in 2018 only to be defeated in a 4-hour battle.

The New York Times described the finality of a US battle win by writing:

In the end, 200 to 300 of the attacking fighters were killed. The others retreated under merciless airstrikes from the United States, returning later to retrieve their battlefield dead. None of the Americans at the small outpost in eastern Syria — about 40 by the end of the firefight — were harmed.

Ever since, Russia just sat on the sidelines waiting for the right moment, which according to our calculation may present itself if Joe Biden wins the elections. Or so, it appears.

To deflect from the real reasons why Assad invited Sergey Lavrov, he announced:

The government was determined to continue to work with Russian allies to implement signed agreements and to ensure the success of Russian investments in Syria.

Whatever Assad believes Russian investments are, The Kremlin pragmatically believes Syria is a sink hole. It could not wrestle the oil from U.S. hands and it failed to convince Europe to pour billions in Syria for reconstruction.

Russia owns a skeleton in Syria, but the skull Assad may be open to new Russian proposals. Ones that would drag either into a more nightmarish scenario or a defeat for the United States.

Putin thinks Biden might just be the right U.S. President, should he win, to jerk around. Just as he did to Barack Obama.

PUTIN WILL TEST JOE BIDEN IF HE BECOMES PRESIDENT

To confirm our suspicions, Borisov said Moscow had presented proposals in July to expand economic ties and expected to finalize an agreement in December (i.e. post US elections). He said Moscow wanted to help Damascus break the blockade of U.S. sanctions.

In other words, Moscow is planning to test Joe Biden forcefully.

Assad has pinned hopes on Russia, his main foreign ally, to save his neck. Western diplomats say Russia’s military involvement in Syria has secured Moscow major regional influence; as well as a bigger foothold in a naval base in Syria’s Tartus port.

Russia turned the tide for Assad and with the regime now facing its gravest challenges, Moscow is in a better position than any other time to further squeeze Assad.

Assad’s economy is in tatters. Some 90% of Syrians live below the poverty line and Syria’s currency has lost 80% of its value.

Russia has criticized the new U.S. sanctions that took effect in June under the so-called Caesar Act.

Washington says the sanctions, which penalize foreign firms dealing with Syrian government entities, aim to cut revenue for Assad’s government and push him back into U.N.-led talks to end the conflict.

The last part is a bit naive.

Assad and Putin Are Planning for a Biden Era