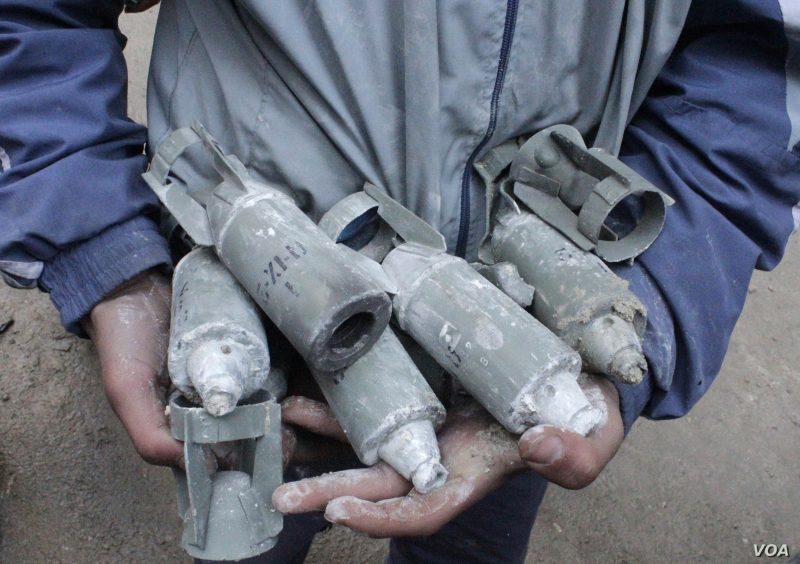 The Cluster Munitions Coalition issued a statement accusing Syria of using cluster bombs in over 800 attacks. It also accused Russia of using its air base in Syria to load the bombs on Syrian warplanes. In effect, Putin is helping Assad cluster bomb civilians.

Syrian government use of cluster munitions has been widespread and is ongoing. Cluster munitions are also used extensively in the Syrian-Russian joint operations. Between July 2012 and June 2018, over 600 cluster munition attacks were recorded by the Cluster Munition Monitor.

Between July 2017 and June 2018, at least 36 cluster munition attacks were documented in Syria, and numerous additional possible instances of use could not be fully confirmed.

In January and February 2016, the Syrian-Russian joint military operation included the use of cluster bombs in at least 14 attacks that killed or injured dozens of civilians. In June and July 2016, at least 47 cluster bomb attacks were documented.

ASSAD LIVES TO KILL HIS OWN PEOPLE

Attacks on innocent civilians is part and parcel of the Assad regime’s war on its own people. The strategy has two purposes. First, to re-introduce fear as an element of control the unpopular Assad cannot survive without. Second, to force migration both of which permit Assad to blackmail neighboring countries in return for concessions.

The use of cluster bombs accelerates the process; especially absent any type of accountability by the world civilized communities to stop Assad. It also forces internal displacement, which the regime uses to seize valuable properties and lands to replenish the treasury.

The Convention on Cluster Munitions (CCM) is holding its ninth annual meeting in Geneva on September 2.  According to the CMM website, it was “adopted in Dublin on 30 May 2008 and opened for signature in Oslo on 3 December the same year.” Through this prohibition and framework for action, the CCM aims to “address the humanitarian consequences and unacceptable harm caused to civilians by cluster munitions.”

Neither Syria, nor Russia have signed the treaty. According to CCM, “To date 120 states have committed to the goals of the Convention, of which 106 have become States Parties and 14 are Signatories.”

Meanwhile, the world community is utterly silent on this latest announcement. Bar the NGO’s, like CMC and HRW. Otherwise, the Syrian civilians no longer exist on the minds and the conscious of world leaders. The barbaric Putin and Assad are running amok without one iota of accountability.

How can we call ourselves ‘The Civilized World”?