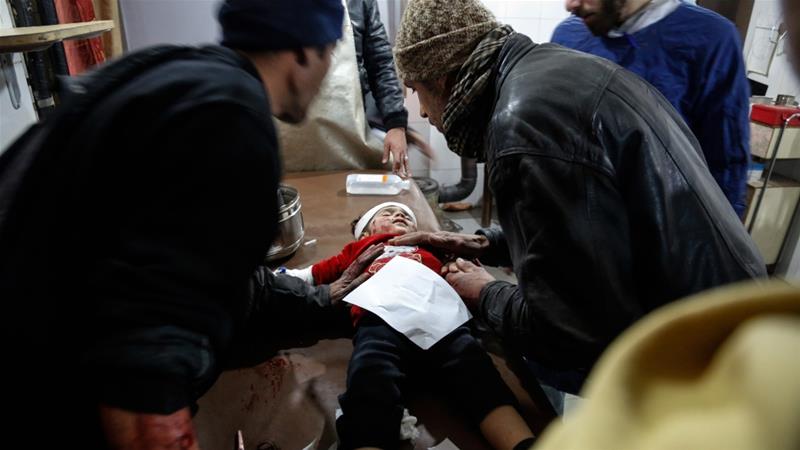 Pro-Assad forces pounded Syria’s eastern Ghouta on Tuesday, killing at least 66 people after the enclave’s heaviest one-day death toll in three years. Assad massacring civilians while Trump is MIA on plight of the Syrian people, which plays right in Russia’s hand. Just like Barack Obama ignored Syria and the Ukraine.

Just another pleasant day for Vladimir Putin courtesy of our White House.

Sparking an international outcry, the surge in air strikes, rocket fire and shelling has killed more than 210 adults and children in the rebel pocket near Damascus since late on Sunday.

France described the government bombing as a serious violation of international humanitarian law.

There was no immediate comment from the Syrian military.

Recent violence in the besieged suburb is part of a wider surge in fighting on several fronts as the psychotic Baschar al-Assad’s military pushes to end the seven-year legitimate rebellion against him.

Panos Moumtzis, the United Nations’ humanitarian coordinator for Syria, on Tuesday condemned the bombing of five hospitals in eastern Ghouta and said intentional attacks on medical facilities “may amount to war crimes”.

In Geneva, the U.N. children’s agency expressed outrage at the casualties among the enclave’s children, issuing a blank press release saying it had run out of words.

The Assad massacres began on Sunday and included 54 children. Another 850 people have been injured according to observers in East Ghouta.

WARPLANES IN THE SKY

Rescuers said the air raids create “a state of terror” among residents in eastern Ghouta, where the United Nations says nearly 400,000 people live. The pocket of satellite towns and farms, which has been under government siege since 2013, is the last major rebel bastion near the capital.

“The warplanes are not leaving the sky at all,” said Siraj Mahmoud, a civil defense spokesman in Ghouta, as the sound of explosions rang out in the background.

Mahmoud said that government forces bombed houses, schools and medical facilities, and that rescuers had found more than 100 people dead “in one day alone” on Monday.

Reuters photos showed bandaged people waiting at a medical point in the town of Douma, some of them with blood streaming down their faces and their skin caked in dust.

Fighting has raged on in eastern Ghouta even though it falls under the ceasefire plans that Moscow brokered with the help of Turkey and Iran.