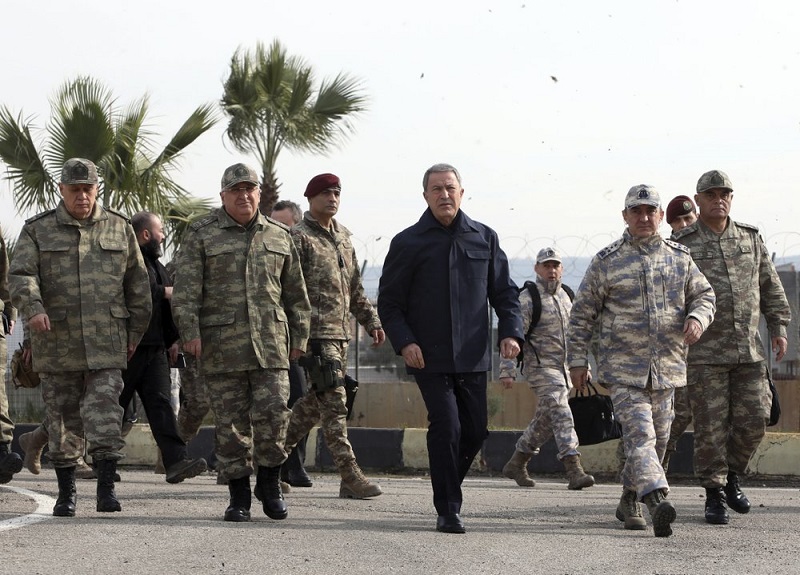 February 5, 2020 1:53 am 0
A Tale of the Four Horsemen of the Apocalypse
Syrians Are Caught Between Four Evils
Assad Psychotic Mental Condition Cannot But Kill Civilians

Recep Tayyip Erdogan’s comments came as Syrian forces reached the western gate of the rebel stronghold of Saraqeb in Idlib province in the north. Simultaneously, the U.N. announced that more than half a million people have fled their homes since Dec. 1, because of the offensive.

The Assad forces killed eight Turkish citizens in an exchange of shelling in Idlib on Monday.

The Assad assault on the Turkish troops came amid a Syrian government offensive that has been advancing since December into the country’s last rebel stronghold, which spans Idlib province and parts of nearby Aleppo. Turkey deployed its troops in some of those rebel-held areas to monitor an earlier cease-fire that has since collapsed.

On Tuesday, Syrian government forces were advancing north under the cover of airstrikes. They reached areas held by extremists for eight years. The bombardment forced more people to flee for safety in areas close to the Turkish border.

Jens Laerke, spokesperson for the Office for the Coordination of Humanitarian Affairs, said:

Since the first of December, in just 2 months, more than 520,000 people have been displaced from their homes, the vast majority of them being women and children. There are no safe places in Idlib, bombs fall everywhere and anywhere.

Laerke said in the 10 days starting Jan. 20, the U.N. rights office verified that Syrian and Russian airstrikes killed at least 83 civilians, including 20 women and 33 children. It also wounded dozens more.

An opposition war monitor said in recent weeks that Syrian troops have captured more than 60 towns, villages and hamlets. The captures happened as Syrian forces try to open a highway linking Damascus with the northern city of Aleppo. Rebels have closed the highway in Idlib since 2012. Saraqeb is the last major rebel-held town in their way.

The deadly exchange increased tensions between the neighboring countries. It also threatened to drive a wedge between Russia and Turkey, which have sought to coordinate their actions in Syria.

Earlier on Tuesday, Turkish Foreign Minister Mevlut Cavusoglu said Ankara and Moscow were trying to keep peace efforts for Syria alive. He renewed a call on Russia to “rein in” Syrian government forces and reiterated Turkey’s determination to retaliate against any future Syrian attack on its troops.

The Astana and Sochi peace processes have not been completely destroyed but have lately started to suffer and to lose importance.

He said Turkish officials were in contact with Russian counterparts “to keep the Astana and Sochi processes alive, to strengthen them, and to arrive at a political solution.”

REIN IN ASSAD OR WE WILL

The regime’s aggressiveness has to be stopped immediately. That was the message I gave Lavrov yesterday.

Cavusoglu dismissed claims by Russia that it cannot fully control the Syrian government. He said the attack came despite a prior notification by Turkey of its troops’ coordinates in Idlib. Russia insisted Turkey failed to notify the Russian military about troop movements overnight.

Turkey is holding funerals for the Turkish servicemen the Assad regime killed. The deaths marked one of the highest single-day tolls for Turkish troops in Syria.

Meanwhile, Syrian state news agency SANA reported technicians began repairing damage on five oil and gas facilities in central Homs province the rebels may have attacked. It includes one of the country’s two oil refineries. It said it extinguished a fire shortly after the unknown assailants shelled the facilities.

Three of the facilities attacked had been hit in December in an apparent drone attack.

No one claimed responsibility for the attack, the fourth against oil and gas facilities in the country in less than a year. The Islamic State group is known to have sleeper cells in the area.