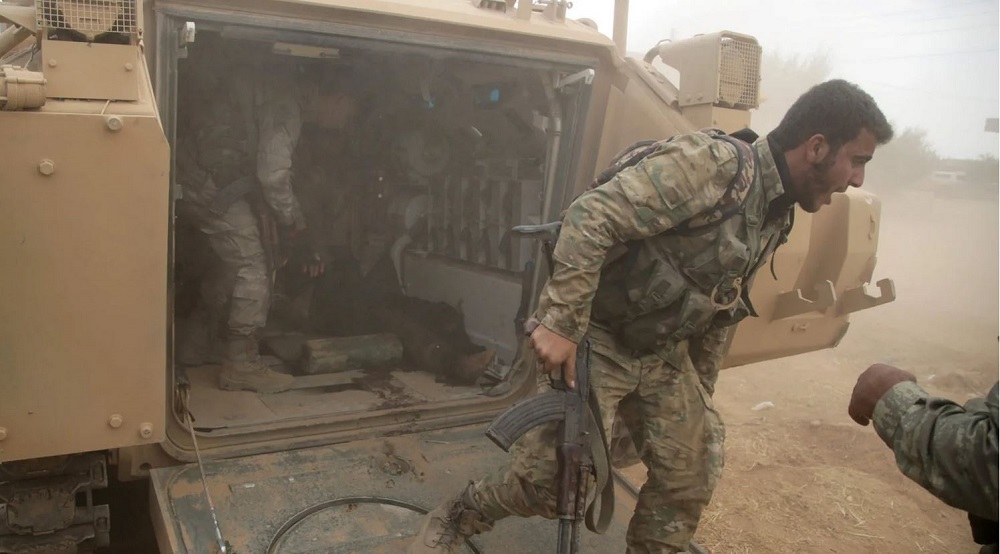 The exchange, which came hours after a large Turkish military convoy entered the northwestern province of Idlib is likely to further increase tensions between Assad and Erdogan. In the past, direct clashes have been rare. It could also cause friction between Moscow and Ankara, which have sought to coordinate their actions in Syria.

Earlier, Turkey’s National Defense Ministry said it sent the Turkish forces to Idlib as reinforcement. But the Assad regime attacked them deliberately despite prior notification of their coordinates to the local authorities. It said Turkish forces responded to the attack, destroying targets. Four Turkish soldiers died at the scene while two others died later in hospital. Seven Turkish troops were wounded.

Speaking to reporters before departing for a visit to Ukraine, President Recep Tayyip Erdogan said Turkish artillery hit some 46 targets in Syria. Erdogan said the attacks involved Turkish warplanes. He claimed that there were between 30 and 35 casualties on the Syrian side.

Those who test Turkey’s determination with such vile attacks will understand their mistake.

He said Turkey told Russia that it would not stand for any “situation where we are prevented” from responding to Syrian assaults.

It is not possible for us to remain silent when our soldiers are being martyred.

The exchange occurred near the Syrian flashpoint town of Saraqeb. The Turkish troops shelled Syrian army positions in three provinces, killing dozens in Idlib, in Latakia province, and in the Hama region.

However, Syria’s state news agency SANA claimed there were no casualties among Syrian troops. Not unusual for the Assad regime to lie.

The escalation comes amid a Syrian government offensive into the country’s last rebel stronghold. Turkish troops are deployed in some of those rebel-held areas to monitor an earlier cease-fire that both Ankara and Moscow agreed upon but that has since collapsed.

ENMITY BETWEEN SYRIA AND TURKEY

Relations between Turkey and Syria have deteriorated sharply since Syria’s civil war began in 2011. Syria accuses Turkey of undermining its security by allowing thousands of foreign fighters to come battle the Syrian army.

With Russian backing, the Syria government has been on the offensive since December to capture and reopen a strategic highway the rebels held since 2012. The offensive ignored a cease-fire deal brokered late last year between Russia and Turkey. The deal has since collapsed.

Syrian government forces captured the key Idlib town of Maaret al-Numan from the rebels last Wednesday. They have now set their sights on Saraqeb. The strategic highway passes through both towns.

The province of Idlib is home to some 3 million people, many of them displaced from other parts of Syria in earlier violence. The United Nations has estimated that the Assad war on his own people displaced about 390,000 Syrians over the past two months. Some 315,000 in December and 75,000 in January.

Assad, with help from Russia, has been bombing hospitals, markets, and schools in an effort to demoralize civilians.

Turkey already hosts 3.5 million Syrian refugees. The current wave of violence in Idlib has raised concerns of a new surge in displaced civilians. Most them fleeing toward the Turkish border.