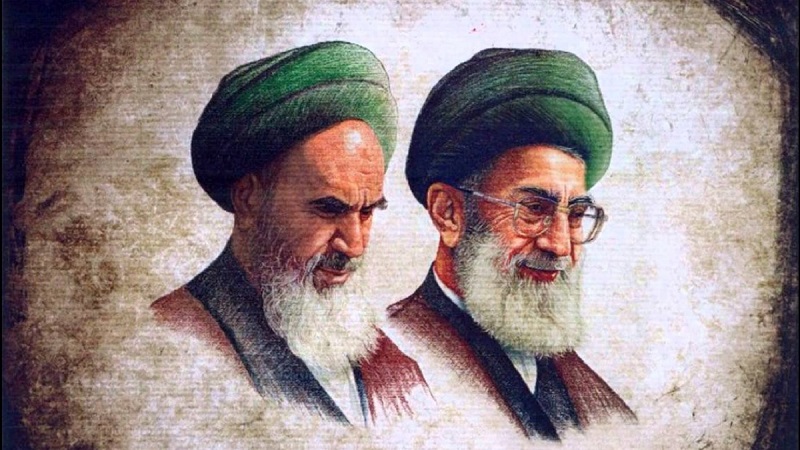 How Washington Turned Iran into a Powerhouse

February 5, 2020 8:05 am 0
Mohammad bin Salman Future is a Noose
Kiss the Gulf Imbecilic Royalty Goodbye
Who Said the Arab Spring is Over?

There are four moments in modern history that triggered and perpetuated the expansion of the Iranian Islamic Revolution at the expense of American interests. First and foremost was President Carter abandoning the Shah of Iran, followed by the Iraq War. Then came the Obama Iran Surrender Deal, which was followed by our fight against the Islamic State in Syria and Iraq. This is how Washington turned Iran into a powerhouse.

The United States embraced four consecutive actions over a period of 40 years that made Iran the big threat of today.

In the wake of the Iranian Islamic Revolution, which Ayatollah Khomeini led from Paris, President Jimmy Carter abandoned the Shah of Iran in the hope the United States could negotiate a deal with a religious zealot. Instead, Khomeini captured our diplomats and held them hostages for 444 days. Zbigniew Brzezinski, Carter’s National Security Advisor at the time, encouraged Carter to abandon the Shah.

Instead, we ducked and ran for cover. Thanks to the advice of Secretary Condoleezza Rice who saw no need to respond to Iranian terror.

Hindsight, this blunder of gargantuan proportion sparked the beginning of a new Islamic terrorist state. Had Carter refused to abandon the Shah, Iran might be a very different country today. Not one run by terrorists burning our flags and killing our boys. 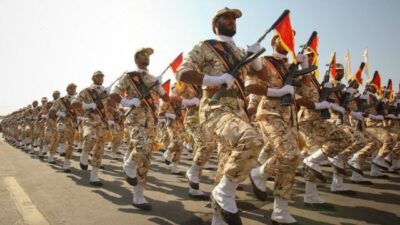 Members of the Iranian revolutionary guard march during a parade to commemorate the anniversary of the Iran-Iraq war (1980-88), in Tehran September 22, 2011. REUTERS/Stringer/File Photo

2) THE GOOD INTENTIONS OF THE IRAQ WAR

The Iraq War was an American effort to democratize the Middle East, and free its people from the shackles of brutal dictators. It was never about oil. The thinking was that if people are free to think for themselves, they would see American values as congruent with their own aspirations for freedom and better future.

What we did not plan for was the reaction of Iran and Arab dictators. The latter secretly undermined our efforts by funding and empowering a religious uprising and the former attacked our troops using al-Qaeda in Iraq as their proxy. Had we responded to Iranian aggression, things might look different today. Possibly, across the whole region.

Instead, we ducked and ran for cover. Thanks to the advice of Secretary Condoleezza Rice who saw no need to respond to Iranian terror.

As far as the Arab dictators, America has a hand in installing or accepting, their undermining demonstrated U.S. inability to change the region. The sick Arab dictatorial predators we helped ascend to power found their antidote in empowering religious violence. 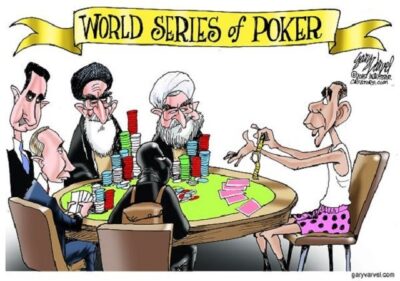 It appears that President Obama is not a very good poker player. The Arab spring has spawned instability throughout the Middle East, Putin’s Russia has become aggressive, ISIS terrorists, Yemen has erupted in Civil War and there are reports that Obama will sign a Nuke Deal with Iran that does not stop them from getting Nukes.

Some call it the Iran Deal and some refer to Barack Obama’s efforts to pull the U.S. out of the Middle East while threatening Israel’s existence as the Joint Comprehension Plan of Action or JPOA. No matter your preference, what Obama agreed to do was to surrender American Levant’s interests to Iran. The same terrorists that killed our troops in Iraq. Go figure!

Obama turned Iran into a powerhouse by releasing the Iranian investments held in escrow in the U.S. during the times of the Shah. To the tune of $150 Billion. Armed with so much power and money, Iran went on a terror binge against Arab countries it sought to occupy. It also used the funds to build a deadlier arsenal of missiles capable of a 2,500 km radius. Within reach of Europe.

In the beginning, it was Assad who released extremist Muslims he held in his jails and empowered them to sell his oil. Assad was sending the message to the west that “if not me, then the Islamist terrorists”.

Eventually, their organic growth got out of Assad hands. To his delight since he knew the west would fall for decimating the Islamist terrorists instead of fighting him. It worked. The west panicked and began plotting to destroy the Islamic State the terrorists founded.

It takes the United States a long time to learn from its mistakes.

That was a crucial mistake that helped Iran grow bolder and stronger.

Instead of directing the Sunni Islamists to fight the Shiite Islamists, the United States, instead, did Iran a very big favor by attacking and decimating their nemesis. Just as we decimated Saddam Hussein who kept Iran in check.

HOW WASHINGTON TURNED IRAN INTO A POWERHOUSE

It takes the United States a long time to learn from its mistakes. As Churchill once said: “The Americans can always be trusted to do the right thing, once all other possibilities have been exhausted.”

Have we exhausted all the possibilities when it comes to Iran, or will the United States legitimize this nation, led by terrorists, to threaten the world even more? Mostly, by fighting Iranian enemies on its behalf.

The United States, under the guise of one strategy or another, assisted Iran to become today’s threat. It did so through four historical actions spanning forty years. Are we finally aware of our mistakes, or will another U.S. President make more to further empower the Ayatollahs in Tehran?

It would not surprise us if this continues. But it will also be a pleasant welcome if the U.S. believes it exhausted all other possibilities by halting all action to defeat the enemies of the Ayatollahs in Tehran, or by surrendering to them as Carter and Obama did.

How Washington Turned Iran into a Powerhouse