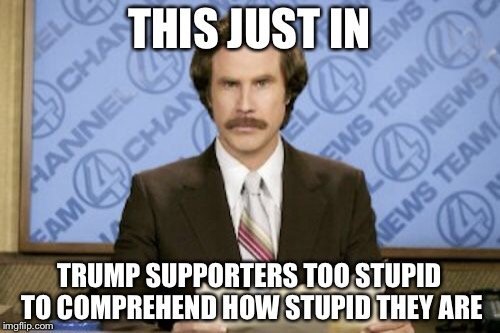 Trump Supporter Average IQ is Below 90

There are two types of Trump supporters. The real genius or the average to borderline retard. You might say that a Trump supporter average IQ varies between 50 and 90, or is above 140. One day, the world is going to unmask Donald Trump’s grades and SAT scores, which will show his intelligence quotient to be below 90. Way below 90 even. Just like the majority of his followers and supporters.

There is a good reason why Trump threatened any school that releases his transcripts or grades with lawsuits. Had they done so, he would be the laughing stock of every American.

The smart Trump supporters are very few. They are counting on his dumbness to extract the maximum benefits to suit their needs. All good ideas, be it on domestic or foreign policy, are theirs. What makes them geniuses rests on their lack of interest to take credit for the good policies. They simply allow Trump to take that political credit, and just sit back and enjoy the fruit of their labor.

Alternatively, every policy Trump cooks in his mind is a bad one. Take the wall idea on the borders with Mexico. Our president has never heard of tunnels if you ask us. There are far better policies to trim or mitigate the risks of illegal immigration. Trump, however, is obsessed with building a wall not realizing that desperate people will do desperate things to cross our borders. And a wall is not going to stop them. It is just dumb posturing on his part, which feeds into the little dysfunctional brains of a Trump supporter average IQ hovering between 50 and 90.

Here is another bad policy. Trump banning immigrants from seven Muslim countries. Please explain the priority of who should be banned in light of the Christchurch massacre of Muslim worshipers by a 28-year old Trump supporter retard. Muslims entering the west and abiding by its laws, or white supremacists defying Darwin’s natural selection theory? When was the last time you read or saw a Syrian refugee spray 50 Christian worshipers in a church?

If this example does not convince you that Trump is a dumb racist U.S. President deploying policies that feed his retarded supporters, then read this article thrice.

More if you have to.

Trump Supporter Average IQ is Below 90