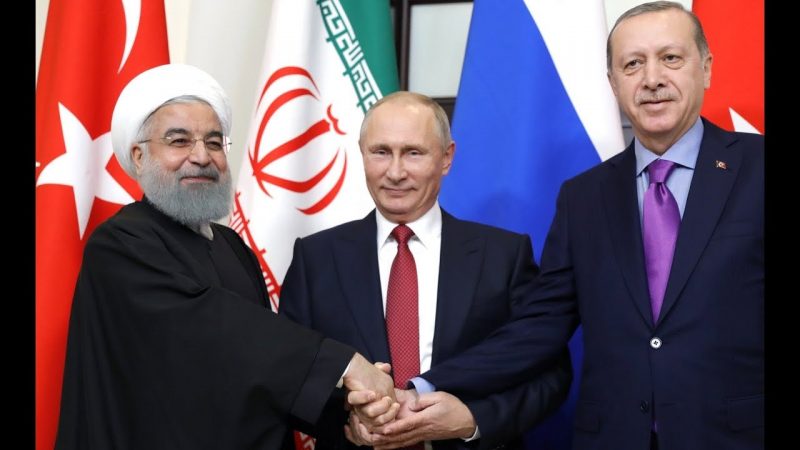 On Wednesday, Iran, Russia, and Turkey, who have shaped Syria’s civil war, will meet to decide the fate of Syria’s future. This despite their involvement in rival military campaigns on the ground. In effect, three foreign powers meet to divide Syrian loot, land, and line.

The leaders of the three countries will meet in Ankara for talks on a new constitution for Syria. The talks will also address increasing security in “de-escalation” zones across the country.

The Syria summit brings together two powers which have been Baschar al-Assad’s most forceful supporters, Iran and Russia, with one of his strongest opponents, Turkey. Erdogan supports the Muslim Brotherhood religious order. He is hoping to secure an Assad regime change and a governance position for the Islamist order.

Russia will object to any Islamist sharing power with Assad. Iran might play along in return for concessions elsewhere.

Cooperation between the rival camps raised hopes of stabilizing Syria after seven years of conflict. The Syrian civil war produced 600,000 casualties and half the population has been displaced.

But the violence has raged on, highlighting strategic rifts between the three countries. In the absence of decisive Washington intervention, Iran, Russia, and Turkey hold Syria’s fate largely in their hands. Washington, thanks to the non-interventionist, Obama-like Trump, has been quietly ignored.

Syria’s army and Iran-backed militias, with Russian air power, have been winning over the rebels near Damascus in eastern Ghouta. Eastern Ghouta represents one of the four mooted “de-escalation zones”.

Turkey, which sharply criticized the Ghouta offensive, waged its own military operation to drive Kurdish YPG fighters from the northwestern Syrian region of Afrin. It has pledged to take the town of Tel Rifaat and push further east, angering Iran.

On this matter, a senior Iranian official said:

Whatever the intentions are, Turkey’s moves in Syria, whether in Afrin, Tel Rifaat or any other part of Syria, should be halted as soon as possible.

Iran has been Assad’s most supportive ally throughout the conflict. Iran-backed militias first helped his army stem rebel advances. Following Russia’s entry into the war in 2015, the militias turn the tide in Assad’s favor.

A Turkish official said Ankara will ask Moscow to press Assad to grant more humanitarian access in Ghouta, and to rein in air strikes on rebel-held areas. “We expect … Russia to control the regime more,” the official told reporters this week. The three foreign powers meet in Ankara to divide Syrian loot, land, and line.

Ankara’s relations with Moscow collapsed in 2015 when Turkey shot down a Russian warplane. Since then, to the concern of Turkey’s Western allies, the relations have recovered.

Turkey was one of the few NATO partners not to expel Russian diplomats in response to a nerve agent attack on a former Russian agent.

Turkey has also expanded relations with Iran, exchanging visits by military chiefs of staff. Its deepening ties with Tehran and Moscow have not yet translated into broader agreement on Syria’s future.

Iran remains determined that Assad stay in power, while Russia is less committed to keeping him in office, a regional diplomat said. Turkey says Assad has lost legitimacy, although it no longer demands his immediate departure. It is probable, the three foreign powers meet to divide loot, land, and line, but also to agree on an Assad replacement. Such move will have a lasting impact on the future of Syria.

At a meeting in Russia two months ago, boycotted by the leadership of Syria’s opposition, delegates agreed to set up a committee to rewrite Syria’s constitution and called for democratic elections.

Turkey says Wednesday’s meeting will discuss setting up the constitutional committee, humanitarian issues, and developments in Syria’s northern Idlib region. Idlib is under the control of rival rebel factions and jihadi groups. It is where Turkey has set up seven military observation posts.

There are issues where all three countries have different policies in Syria. In this regard, an aim is to find middle ground and create policies to improve the current situation.