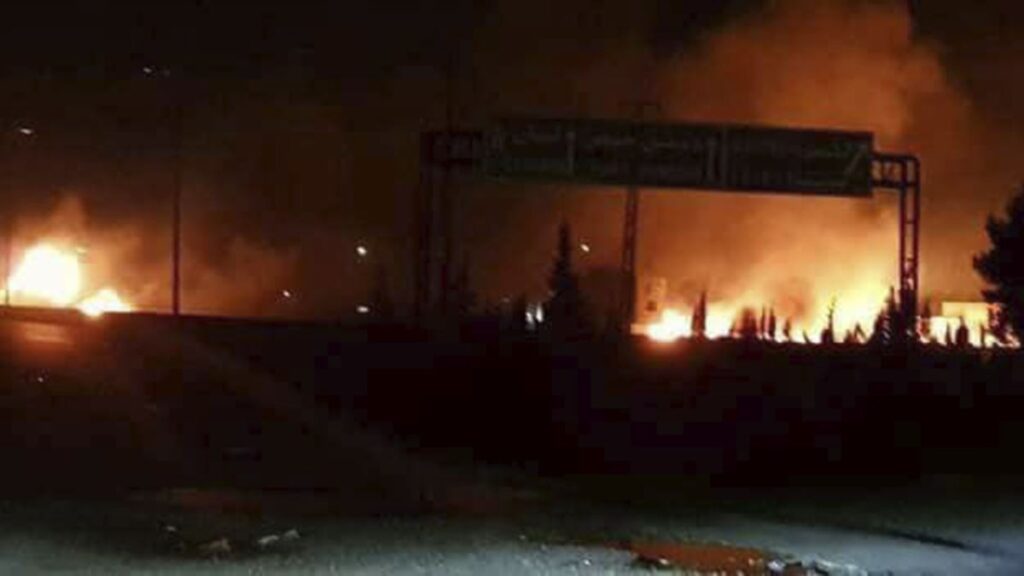 Israel Struck Iranian positions on Monday, which targeted a major Iranian-run ammunition depot in Jabal al Mane near the town of Kiswa. The stealth attacks the Syrian defenses could not intercept killed 5 foreign terrorists either Iranians or Iranian-backed. It wounded a score of them.

The IRGC has long inhabited this rugged area almost 15 km south of the center of Damascus.

According to two senior army defectors, other strikes hit Muqaylabiya and Zakiya towns near Kiswa where Iran and Hezbollah deployed their terrorists. No information on casualties or wounded has been available.

State television said Israeli missiles had flown over the Syrian Golan Heights where they conducted raids around the capital. Live footage showed huge blasts across the skies of the capital.

THE BLASTS SHOOK WINDOWS IN DAMASCUS

Damascus residents could hear the severity of the blasts. They shook windows of several neighborhoods there.

Zaid al-Reys, a Syrian analyst in touch with sources on the ground. said:

The Israelis have targeted a major ammunition depot. There were several strikes and the blasts were huge. There are reports that Iranian personnel have been killed.

The bases in eastern, central and southern Syria which Israel had hit in recent months have a strong presence of Iranian-backed terrorists. This according to intelligence sources and military defectors familiar with the locations.

Syria never publicly acknowledges that the strikes target Iranian assets in a country where Tehran’s military presence has covered most government-controlled areas.

Western intelligence sources say Israel’s stepped up strikes on Syria in the last few months are part of a shadow war approved by Washington and part of the anti-Iran policy that has undermined in the last two years Iran’s extensive military power without triggering a major increase in hostilities.

In the past, Israel has acknowledged conducting many raids inside Syria since the start of the civil war in 2011. Israel, like the Syrian people, regards Iran’s presence as a strategic threat.

Israeli defense officials have said in recent months that Israel would step up its campaign against Iran in Syria where, with the help of its proxy militias, Tehran has expanded its presence.