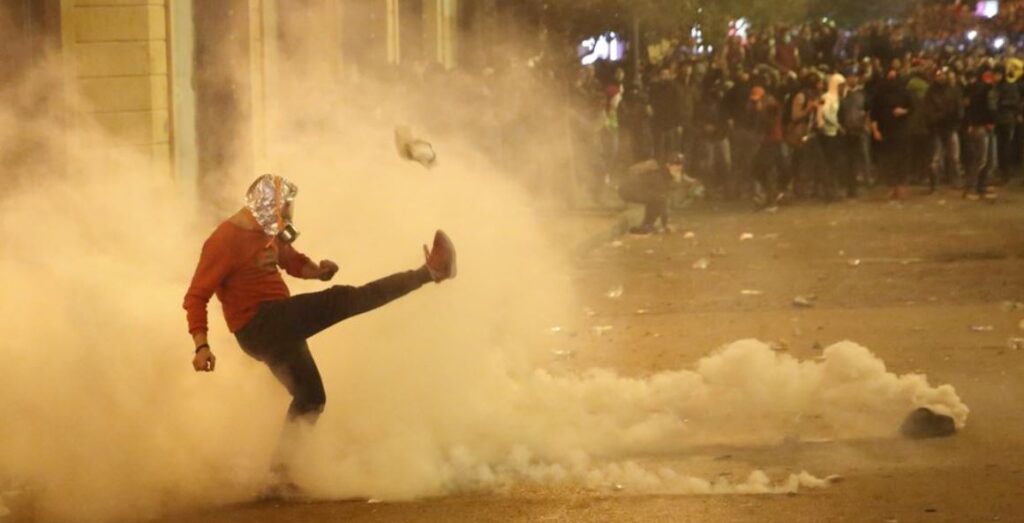 December 17, 2019 5:11 am 0
The People of Lebanon Versus Hezbollah
As Assad Destroyed Syria So Did Hezbollah Destroy Lebanon
Time to Sanction President Michel Aoun

Hezbollah and Amal thugs clashed with security forces and set fires to cars in the capital early Tuesday. Instigated by their leaders, they apparently were angered by a video circulating online that showed an unknown man insulting Shiite figures, which is acceptable under Lebanon’s democracy. Hezbollah is slowly Syrianizing Lebanon. The United States has classified Hezbollah as a terrorist group.

It was the third consecutive night of violence, and came hours after Lebanon’s president postponed talks on naming a new prime minister. This further prolonged the turmoil and unrest in the small Mediterranean country.

HEZBOLLAH IS TRYING TO FORCE HARIRI

President Michel Aoun postponed the binding consultations with leaders of parliamentary blocs after the only candidate — caretaker Prime Minister Saad Hariri — failed to win the backing of the country’s largest Christian groups amid a worsening economic and financial crisis.

Hariri has indicated on several occasions that he is unwilling to form a new government, or become prime minister again. Unless the new government meets protesters’ demands of technocrats running the country, and not corrupt politicians.

The postponement followed a violent weekend that saw the toughest crackdown on demonstrations in two months.

Many consider Nabih Berri one of the most corrupt politician in Lebanon. He has been siphoning funds from the government for over three decades.

Lebanese security forces repeatedly fired tear gas, rubber bullets and water cannons to disperse hundreds of protesters in downtown Beirut. It was the worst violence since demonstrations against the political elite erupted in mid-October.

On Monday night, a group of young men clashed with security forces in downtown Beirut. It happened after a video began circulating online in which a man insulted Shiite political and religious figures, heightening sectarian tensions. The group, supporters of Hezbollah and the Amal Movement led by Parliament Speaker Nabih Berri, set at least three cars on fire and hurled stones and firecrackers at riot police.

Many consider Nabih Berri one of the most corrupt politician in Lebanon. He has been siphoning funds from the government for over three decades.

Aoun scheduled to meet with the heads of parliamentary blocs to discuss the naming of the new prime minister. Those consultations are binding, according to the constitution, and Hariri, who resigned under pressure Oct. 29, was widely expected to be renamed.

The presidential palace announced re-scheduling the  consultations until Thursday.

The U.N. special coordinator for Lebanon, Jan Kubis, had warned that because of the collapsing economy, such postponements are “a risky hazard both for the politicians but even more so” for the people.

Lebanon is enduring its worst economic and financial crisis in decades with a massive debt, widespread layoffs and unprecedented capital controls imposed by local banks amid a shortage in liquidity.

Hariri resigned after protests began earlier in October over widespread corruption and mismanagement. The palace said Hariri had asked Aoun to allow for more time for discussions among political groups before official consultations.

Earlier, the country’s main Christian groups said they refused to back Hariri, who has served as premier three times.

His office said in a statement that he is keen for national accord. He added that had he been named to the post, it would have been “without the participation of any of the large Christian blocs.”

Under Lebanon’s power-sharing system, the prime minister has to be a Sunni Muslim, the president a Maronite Christian and the parliament speaker from the Shiite community. Hariri has emerged as the only candidate with enough backing for the job. The protesters, however, who are demanding a Cabinet of independent technocrats, are rejecting him.

HEZBOLLAH WANTS LEBANON TO FAIL TO SUSPEND THE CONSTITUTION

Although the protests had united all sectarian and ethnic groups against the ruling elite, tensions had surfaced from the start between protesters and Hezbollah and Amal thugs, after the latter rejected criticism of its leaders.

Hariri had asked the IMF and the World Bank for help developing a reform plan to address the economic crisis.

Moody’s Investors Service said that without technical support from the IMF, World Bank and international donors, it was increasingly likely that Lebanon could see “a scenario of extreme macroeconomic instability in which a debt restructuring occurs with an abrupt destabilization of the currency peg resulting in very large losses for private investors.”

Its currency has been pegged at 1,507 Lebanese pounds to the dollar since 1997; but in recent weeks it has reached more than 2,000 in the black market. Lebanon’s debt stands at $87 billion or 150 percent of GDP.