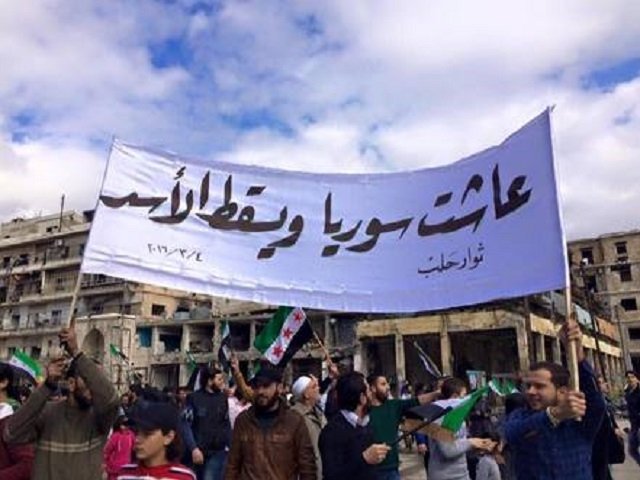 For the first time in years, thousands of Syrians nationwide took advantage of a nearly week-long ceasefire on Friday to resume anti-government protests under the slogan “The Revolution Continues!” You think Syrian Revolution is dead? Think again.

Waving the three-starred tricolor flag that has become the uprising’s emblem, demonstrators in opposition-held areas of Aleppo, Damascus, Daraa and Homs called for the downfall of the psychopath Baschar al-Assad’s regime. In total, some 80 regions in Syria were out protesting peacefully against the Assad regime (See video below).

“You could say we’ve gone back to the beginning,” said Hasaan Abu Nuh, an activist from the flashpoint rebel town of Talbisseh in central Homs province. You think Syrian Revolution is dead? Think again.

Syria’s conflict first began in March 2011 with widespread protests against the regime.

Demonstrations were at their largest on Fridays, and activists early on began assigning themes to the weekly marches.

But by 2013, a fierce government crackdown and heavy shelling had stamped out most attempts to stage protests.

Abu Nuh said the last demonstration in Talbisseh was in June 2012. Since then, rocket attacks and air strikes made residents too afraid to gather in large numbers.

However, a landmark ceasefire that came into effect early last Saturday has brought relative calm to opposition areas.

On the first Friday since the truce began, crowds across the country returned to the streets, waving banners reading “The Revolution Continues!”

“People are so, so happy. There was crying, there was joy, but there was also a lump in people’s throats,” Abu Nuh said.

“There were a lot of young guys that used to protest with us who weren’t there today because they’ve been killed,” he told AFP by phone.

In Syria’s second city, Aleppo, thousands of people took to the streets in the opposition-held eastern neighborhoods.

Abu Nadim, an activist in the city, said:

“With this truce, we have the opportunity to express why we came out to the streets in the first place, which is the downfall of the regime,”

He said he also wanted to show the world that demonstrators in Aleppo and elsewhere are not “armed gangs, but a people demanding freedom and the downfall of the regime”.

Abu Nadim is responsible for coming up with slogans and painting them on large, white banners.

AFP spoke to him while he painted “Long live Syria, may Assad fall!” ahead of a protest where hundreds of people marched carrying similar signs.

Aleppo has been divided since 2012 between government forces in the western districts and rebels in the east.

When Friday’s crowd passed through a neighborhood near the front line, they could hear the sound of sniper fire coming from a government-held district. But no one budged, an AFP correspondent there said. Syrians are no longer afraid of Assad and his genocidal thugs.