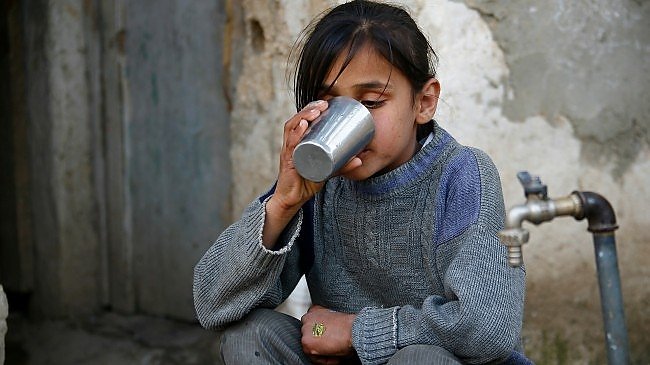 The UN children’s agency warned on Friday that millions of Syrian children face a “high risk” of disease due to clean water scarcity and the scorching summer heat.

Syria’s civil war, now in its fifth year, has damaged much of the country’s infrastructure and killed more than 300,000 people. Millions are displaced within the country, forced to live in crowded and dirty conditions. Water cuts are common throughout Syria.

UNICEF said that since the beginning of 2015, Syria has reported 105,886 cases of acute diarrhea. There has also been a sharp increase in cases of Hepatitis A, with a record number of 1,700 new cases reported in one week alone in February, the agency said.

“The situation is alarming, particularly for children who are susceptible to water borne diseases. Water has become even more scarce and unsafe, and poor hygiene conditions especially among the displaced communities are putting more children at severe risk.”

The area of Deir el-Zour province, where sewage has contaminated the Euphrates River, is at a particularly high risk, with 1,144 typhoid cases having been reported there, UNICEF said.

It says another factor in the mix are the high fuel prices.

In the northwestern province of Idlib, fuel prices have tripled recently. In many places, water pumping stations are operating only two hours a day, reducing the availability of water and increasing water scarcity.

Furthermore, the closure of border crossing points with Jordan earlier this year has disrupted the delivery of water treatment supplies, and stocks in Syria are running out.

UNICEF urgently appealed for $5 million by end of August for its water, sanitation and hygiene response inside Syria to assist with water scarcity.

In Geneva, a UN official said the UN refugee agency is in contact with the Jordanian authorities to allow some 1,800 people stranded on the Syrian side of the border to cross into Jordan.

William Spindler of the UNHCR told reporters Friday that the group was “living in deplorable conditions.”

Jordan closed its border with Syria in April after Islamic militants captured the Nasib border crossing point, depriving Assad from the last crossing point with Jordan his troops held.

On Syria Biden Got Away With Murder
Federal Syria or Not, Assad Has to Account for His Crimes
America Is Now Fighting A Proxy War With Itself In Syria
Things That Matter 382