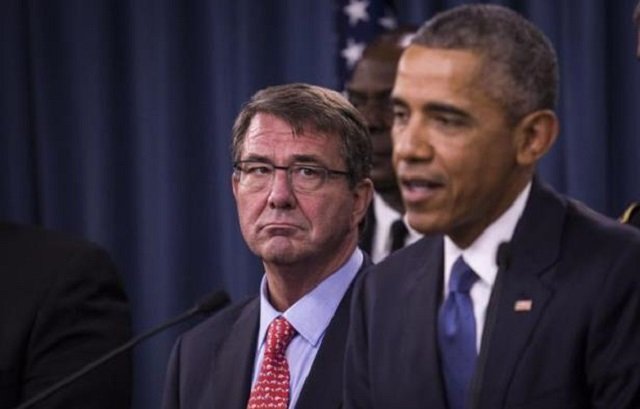 We Pay, You Die

Why Obama’s Syria plan is such an embarrassment

The seriousness of the Obama administration’s commitment in Syria became obvious on Tuesday, when Defense Secretary Ashton Carter told the Senate Armed Services Committee how many “moderates” the United States had vetted to fight against ISIS. Only 60 had passed American muster to date, Carter said, in a program worth $500 million to train and equip 5,400 combatants the first year.

One reason for this is that the American vetting standards are particularly high, almost absurdly so in light of the chaotic circumstances prevailing in Syria. But the greater problem is that the program is a splendid example of American crassness and self-centeredness.

After watching Syria burn for years, without doing anything to prevent the carnage, the Obama administration decided last year to put in place a scheme to mobilize and arm Syrians against ISIS. One condition of the American program is that the Syrians agree not to fight the Assad regime. In other words, recruits should abandon their own cause and replace it with that of the American government.

The reason is simple and has been repeated by administration officials: they do not want a military defeat of the Syrian regime. Rather, they seek a transitional political settlement that would oblige President Bashar Assad to step down. Anyone following Syrian dynamics knows this may sound persuasive on Pennsylvania Avenue, but that it has absolutely no basis in Syria’s reality.

It is incomprehensible to many Syrians why they should give up on their efforts to overthrow a leader who has spent four years butchering them, on behalf of an American president who, during that time, has been secure in his indifference to their fate.

Washington has been a divided capital over Syria since 2011. There has been no agreement on which policy the United States should adopt there, and neither Obama nor his national security adviser Susan Rice, whose role is to coordinate and unify policy, has done much to impose direction on American behavior.

Instead, the administration has pursued its failed plan to train ‘moderates’ against ISIS while relying increasingly on other armed groups it has not vetted, and in some cases has actively shunned. In northern Syria, the United States is collaborating with the Kurdish People’s Protection Units (YPG), the armed wing of an affiliate of the Kurdistan Workers Party (PKK). The PKK has been designated a foreign terrorist organization by the State Department.

In Iraq, America’s de facto allies against ISIS happen to be pro-Iranian Shiite militias. These have engaged in sectarian crimes and have even challenged the authority of the Iraqi government the administration claims to be backing.

Such pragmatic alliances have been driven by necessity, given the dearth of effective armed groups available to fight ISIS. Yet, there are two major difficulties in this reasoning that Obama and his advisers will have to address sooner or later.

The first is that, while ISIS may be the focus of American attentions, those in the region have other priorities that may well clash with those in Washington. The YPG’s main concern is protecting Kurdish areas and exploiting the current conflict to carve out an autonomous Kurdish territory in Syria. Indeed, there have been multiple reports of Syrian Kurds expelling Arabs from the areas seized from ISIS.

A second problem, related to the first, comes from the fact that Obama and his team have ignored their own valid conclusion that the fight against ISIS cannot be won by force alone. They always believed there needed to be a political component to reinforce the military gains made on the ground. That is why in Iraq the administration early on sought to push the Iraqi government to adopt more inclusive policies toward the Sunnis, feeling that Sunni discontent acted as a valuable recruiting tool for ISIS.

Yet it’s unclear how this squares with Washington’s de facto backing of sectarian Shiite militias in Iraq, even if they are the only forces upon which the Americans can rely. Nor does it really explain why the logic of Sunni inclusiveness applicable in Iraq, where Sunnis are a minority, was never applied in Syria, where Sunnis are a majority.

Complicating matters further, the Obama administration appears ready to sign a nuclear accord with Iran in the near future. If this actually goes through, the Americans may be even less likely to challenge Iranian interests in Iraq and Syria. This is bound to increase Sunni radicalization in both countries. In other words, Obama’s incomprehensible, contradictory policies may lead to precisely those outcomes the president seeks most to avoid.

In a sense, we should celebrate the fact that only 60 Syrians have been vetted to fight ISIS in Syria. This paltry figure exposes the true nature of the American effort, as well as the lack of commitment, the cowardice, the superficiality, and the moral poverty prevailing in Washington. Obama has lied about American intentions in Syria since the beginning, and only fools, present company included, imagined things might someday change.

If Obama needed $500 million to gull Congress into believing he was doing something serious in Syria, he should have saved his cash. The Syrians will never become American cannon fodder. They, first, have to consider their own lives, suffering and future, for which a majority of Americans have displayed not the slightest concern.

We Pay, You Die