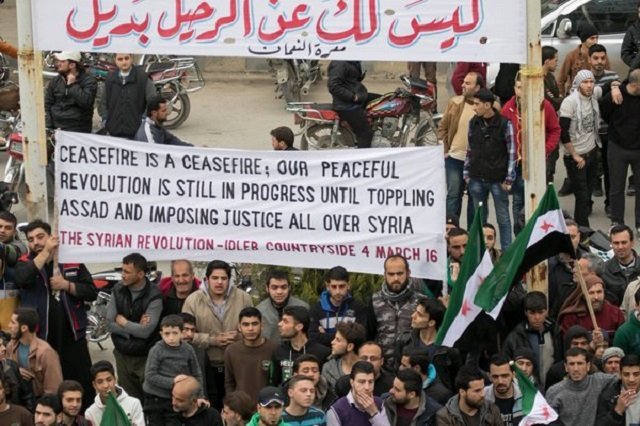 Amazing Resilience of the Syrian People

Pictures emanating from Syria, during this volatile cessation of hostilities, have demonstrated without a shadow of a doubt the amazing resilience of the Syrian people. Instead of lamenting, kneeling, or submitting to the Assad tyranny after five years of a brutal civil war, Syrians took to the streets, as they did in 2011, to protest the regime and its atrocities for the world to witness.

After five years of death and destruction, the Syrian people are still energized behind their Syrian Revolution to succeed. Hey Putin, does that not remind you of Russian defiance against Hitler’s Barbarossa campaign in World War II even as his armies massacred innocent villagers on their way to Moscow and St. Petersburg? Just as what you are doing today to Syrian hospitals and schools?

After five years of war, half a million deaths, 12 million displaced Syrians, the Syrian people are protesting the Assad regime as if it was day one of their Syrian Revolution. The amazing resilience of the Syrian people is awakening a giant within them history books will remind their future generations of what it meant to be free even as Assad rained death upon his own people. Never will Syrians go back to these dark and grotesque days again of fearing a tyrant. Not after one witnesses the beauty of their protests.

The peaceful demonstrations have started almost simultaneously in 104 different areas to include the besieged city of Aleppo the regime hopes to submit to its cruel despotism.

According to Wael Abdul Aziz, a Daraya oppositionist, there were on Friday 104 protests across rebel-held Syria.

104 demonstrations shows the people of Syria are not willing to admit defeat. Syrians will not kneel to the conspiracy of Barack Obama and Vladimir Putin hatched to weaken American interests in the Middle East by insuring Iranian hegemony over Syria.

In our opinion, the amazing resilience of the Syrian people will bury more Hezbollah and IRGC terrorists in Syria. It will also drain Assads’ armies from every man aged between 16 and 45 as well as eventually create the conditions on the ground to realize that the will of the Syrian people must prevail. Without them we can never defeat terror. Assad and Iran included. Or we can bury our head in the sand to inject more possibilities for terror to expand.

Obama’s secret agenda will come to an end in January of 2017. After that date, the world would breath a sigh of relief. Additionally, the west may realize that listening to the Syrian people is the best option to defeat the terror Obama empowered by ignoring ISIS for so long and by agreeing to the Iran Deal.

Amazing Resilience of the Syrian People