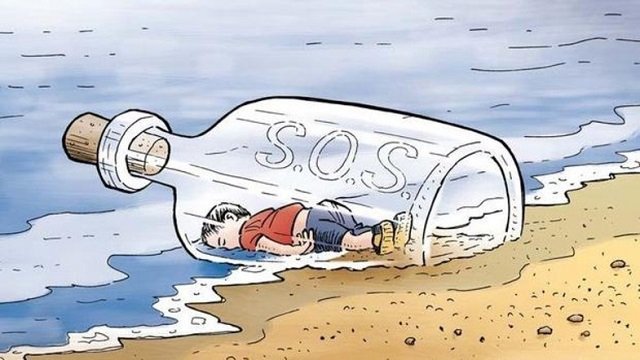 ‘How to sponsor a Syrian?’ is Canada’s top Google query on refugees

September 4, 2015 5:37 pm 0
Thank You Canada
Dear Canada, You Just Gave Birth to Your Own Steve Jobs
Drowned Syrian toddlers’ family did not apply for Canada entry

Source: CBC News – by Mike McDonald (‘How to sponsor a Syrian?’ is Canada’s top Google query on refugees)

With the Syrian refugee crisis receiving renewed attention, Canadians are increasingly taking to Google to find out more about the ongoing conflict.

The technology company tracked the top five search terms relating to the Syrian refugee crisis from Sept 2. at 9 a.m. to Sept. 3 at 9 a.m. Here are the most popular queries and our attempts to answer them.

1. How to sponsor a Syrian refugee in Canada?

According to the government of Canada website, “a number of organizations have signed sponsorship agreements with the Government of Canada to help support refugees from abroad when they resettle in Canada. These organizations are known as sponsorship agreement holders. They can sponsor refugees themselves or work with others in the community to sponsor refugees.”

2. How to help Syrian refugees?

There are numerous organizations operating in Canada providing support to Syrian refugees. CBC News has compiled a list of some of the most prominent groups.

3. Why is there a refugee crisis?

Syria has been embroiled in a civil war since March of 2011. The unrest began within the context of Arab Spring protests and large demonstrations against President Bashar al-Assad’s government.

4. How much does a refugee cost Canada?

“It’s an unanswerable question,” said Audrey Macklin, Professor and Chair in Human Rights Law at the University of Toronto. “How much does a Canadian cost the government?”

According to the Canadian Council for Refugees, “refugee claimants and refugees recognized by the Immigration and Refugee Board receive no special income assistance. They may, depending on provincial regulations, be entitled, like other residents, to social assistance.”

‘How to sponsor a Syrian?’ is Canada’s top Google query on refugees

Thank You Canada
Drowned Syrian toddlers’ family did not apply for Canada entry
Dear Canada, You Just Gave Birth to Your Own Steve Jobs
Syria 450