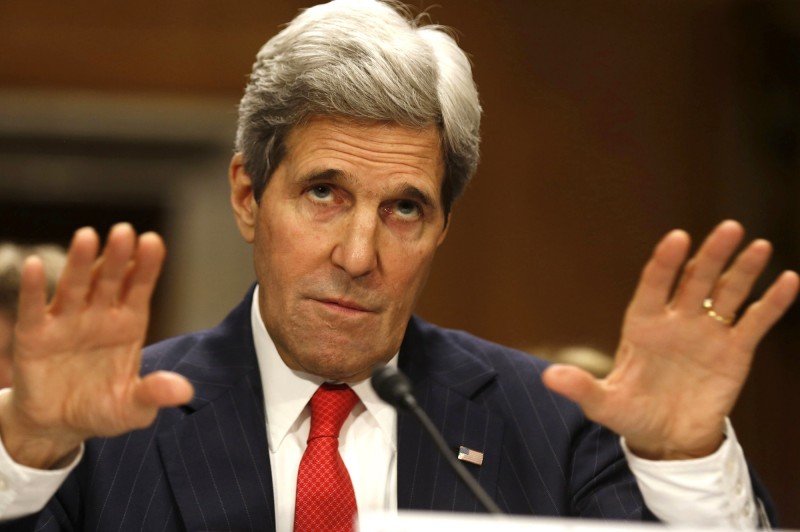 The Stupidest U.S. Secretary of State

John Kerry must be, by far, the stupidest U.S. Secretary of State ever.

On the fourth anniversary of the Syrian Revolution, Kerry announced to the world that the U.S. may have to negotiate with Assad of Syria. This is while Assad ignores the world and keeps using Chlorine to gas innocent children and women.

What is wrong with John Kerry? He must be, undoubtedly, the stupidest U.S. Secretary of State ever. He could not even wait few days or a week to make his announcement. He chose, instead, to make his stupid remark about negotiating peace with the mass murderer Assad on the fourth anniversary of the Syrian Revolution that took the lives of over 230,000 Syrians and displaced over 11 million.

The U.S. State Department backtracked on his announcement almost immediately because, as it happens, not only it was the fourth anniversary of the revolution but also because the Syrian opposition leadership was in Washington to consult with the White House and the US State Department. Talk about a dimwitted man.

With this unthinkable step, not only has Kerry shown his true colors as the admirer of mass murderers and genocidal maniacs, but he also has provided us with a glimpse of what he has in store for his best friend Baschar al-Assad. Despite Assad’s crimes against humanity, Kerry remains privately committed to Assad and his rule no matter what he says publicly.

Could Assad be his ticket to a Nobel Prize if only he can negotiate a deal with him better than the stinking deal he is negotiating now with Iran? He must think so to utter that stupidity.

Josh Rogin wrote an article for the Bloomberg View we urge everyone to read:

Syrian President Bashar al-Assad is brazenly challenging the latest U.S.-led effort to stop him from using chemical weapons, and the Barack Obama administration has yet to say if it will do anything about it.

Two weeks ago, the U.S. got the United Nations Security Council to adopt a resolution calling on the Syrian regime to cease dropping barrel bombs filled with chlorine gas on civilians.  U.S. Ambassador to the UN Samantha Power said the resolution, which passed 14-1 and was endorsed by all the permanent members including Russia, “made it crystal clear that the use of chlorine weapons was no less evil than that of chemical weapons.”

Yet on Monday, Assad’s military killed at least six civilians, including three children, and injured dozens with a chlorine gas bomb attack in the northwestern city of Sarmeen, according to activists on the ground and independent monitoring groups such as the Syrian Observatory for Human Rights. The Syrian government denied the claims.

“Assad is testing the new red line,” Noura al-Ameer, a leader of the Syrian Opposition Coalition, told me Wednesday. Until this year, she was vice president of the group, which Obama has recognized as the legitimate representative of the Syrian people.

To the Syrian opposition, the attack was reminiscent of events of 2012 and 2013, when Assad used Sarin gas against his own people, according to a UN investigation. The regime began with small doses, perhaps to test whether Obama would enforce the “red line” he had set promising action if Assad used chemical weapons en masse. After an attack that killed at least 1,400 people in August 2013, Obama promised airstrikes, but then backed down in exchange for a Russian-brokered deal to remove chemical weapons from Syria’s stockpiles.

Unfortunately, chlorine, which has non-military uses, was not part of that deal. Assad has flaunted the loophole. “This is history repeating itself,” Ammer said of the latest attack. “He is testing Barack Obama on the UN resolution and he sees there is no response.”

“The international community’s failure to act has led to the Assad regime’s chemical attacks,” added Najib Ghadbian, the Syrian Opposition Coalition’s representative in the U.S. “We must show Assad that his war crimes will not be tolerated, and protect innocent Syrians with a no-fly zone.”

Obama press secretary Josh Earnest was pressed to respond on the latest attack at Tuesday’s White House briefing. He said the U.S. condemned the strike but would hold off on any action until the evidence is verified and responsibility for the deaths clearly attributed to the regime.

“If these allegations are confirmed, this would tragically be only the latest example of the Assad regime’s atrocities against the Syrian people,” he said. “The regime continues to inflict daily terror through airstrikes, barrel bombings, arbitrary detention, torture, sexual violence, murder, starvation and the use of chemical weapons.”

Under the UN resolution, the Assad regime would be subject to penalties pursuant to Chapter 7 of the group’s charter, which include sanctions and the use of force. Earnest said those kinds of penalties would not being considered until the attacks are confirmed.

The evidence includes videos circulated on social media, some of which were taken by the so-called White Helmets, a group of Syrian aid workers who are not parties to the conflict and thus able to work in areas controlled by all sides. They show small children suffering from the symptoms associated with a gas attack. Getting solid forensic proof of a gas attack and bringing it out of Syria is complicated, and the Assad regime challenges such evidence as a matter of course.

Regardless, the Organization for the Prohibition of Chemical Weapons, an intergovernmental group that investigates such atrocities, said in January it had a “high degree of confidence” that chlorine gas had been used in at least three attacks on civilians in 2014. The group said the gas bombs were dropped by helicopters, and as Power has noted, “only the Syrian regime uses” helicopters.

Syria seems to be following the same playbook it used with sarin. “Assad consistently would test and push the red lines of adversaries. Now you are seeing that with the use of chlorine,” said Andrew Tabler, a senior fellow at the Washington Institute for Near East Policy. “That combined with the comments of Secretary Kerry allowed him to project power to Syrians and ultimately perpetuate his hold on power through the use of chemical agents.”

Tabler was referring to Secretary of State John Kerry’s comments on Sunday — the fourth anniversary of the Syrian uprising — when he told CBS that the U.S. might negotiate directly with Assad to find an end to the war. The State Department later clarified that Kerry meant the U.S. would negotiate with representatives of the Assad regime, not with Assad himself.

Assad quickly pounced on Kerry’s comments,  declaring on Iranian television that he wanted Kerry to back up his words with actions before he would engage in negotiations. Assad won a public relations victory by portraying Kerry’s statement as an endorsement of his legitimacy.

Several Syrian opposition leaders were in Washington last week to meet with White House and State Department officials, and they were appalled by the seemingly tone-deaf nature of Kerry’s statements.

“I saw that the headline was changed and walked back by a State Department tweet. This is unacceptable. The Assad state media took the first headline and ran with it,” said Syrian activist Lina Sergei Attar, who was in the White House meetings. “This is an insult and humiliation to the Syrian people on the anniversary of the revolution that demanded freedom and now mourns more than 200,000 dead.”

Privately, top U.S. officials told the Syrian delegation that the U.S. will not work with Assad and remains committed to forcing him from power. While Kerry’s comments are not necessarily in conflict with that goal, they ultimately served to undermine it, Attar said.

It’s unclear what the Assad regime would have to do to get the White House to intervene in the war or endorse any policy, such as a no-fly zone, that could put the U.S. in direct confrontation with Syrian forces. The Obama administration can no longer maintain that it is pursuing a political negotiation with the regime and at the same time admit that it has no plan whatsoever to restart that political process. Assad has no real incentive to respect any of the West’s red lines so long as the fight against the Islamic State remains Washington’s overriding concern. Those jihadists certainly need to be defeated, but for now the price is mounting in more atrocities brought on the Syrian people.

The Stupidest U.S. Secretary of State