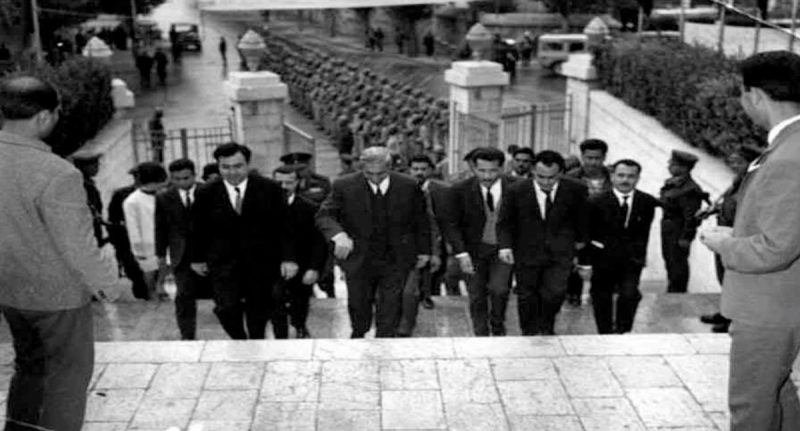 The Spy the Trees and the Golan Heights

Eli Cohen, probably Israel’s most renown spy, infiltrated the Syrian Army between 1961 and 1965 to become chief advisor to Syria’s Minister of Defense. Before the Syrian security apparatus discovered the ruse, Cohen had single-handedly, paved for the right conditions for Israel to occupy the Golan Heights in 1967. This is the story of the spy, the trees, and the Golan Heights that very few people outside Israel know.

Cohen began his spying career indulging in high-style life with some of the highest ranking military officers in Syria. A Wikipedia extract details his early life:

Cohen continued his social life as in Argentina, spending time in cafes listening to political gossip. He also held parties at his home, which turned into orgies for high-placed Syrian ministers, businessmen, and others, who used Cohen’s apartment “for assignations with various women, including Defense Ministry secretaries, airline hostesses, and Syrian singing stars.” At these parties such highly placed officials would “talk freely of their work and army plans. Eli, who would feign intoxication, remained sober and listened carefully. In addition to providing loans to government officials and acting as an avid host, he was asked for advice by government officials, who were often intoxicated by the alcohol he freely provided.

The story goes that Cohen, whose Syrian name was Kamel Amin Thaabet, visited the Golan Heights. The Syrian Minister of Defense accompanied him. As he toured the grounds, Cohen witnessed Syrian soldiers crouched in trenches taking the beating of the sun. After the trip, Cohen recommended to plant some trees by these trenches to relieve the soldiers from the sun’s heat. The Syrian Minister of Defense ordered the trees. That move became the single biggest mistake the Syrian Army made to help Israel occupy the Golan Heights in the 1967 six-day war.

Between June 5 and June 10, 1967, Israeli fighter jets bombed every Syrian position on the Golan marked by a freshly planted tree. This is the story of the spy, the trees, and the Golan Heights. Syria lost the Golan Heights in 1967 due to the stupidity of the Syrian military; and it is losing it permanently today due to the Assad regime stupidity. Hey, Assad supporters, how about you chant “Assad, or we will burn the Balad” now? Anyone believes Assad is a smart cookie needs their heads examined.

The United States is poised today to recognize Israeli sovereignty over the Golan Heights. As Syria loses its territorial integrity, not to rebels and dissidents fighting the regime, but to regional superpowers like Israel, Turkey and the Kurds backed by the United States, the Assad regime looks weaker and weaker. It is one thing to re-integrate lands lost to ISIS or the Free Syrian Army. It is quite another to convince Syria’s powerful neighbors that their spoils of war are not justified. Ill-gotten to be exact.

In reality, nothing has changed much since the 1967 war. Today Israel still strikes Assad positions in Damascus at will. Trees, or no trees.

The Spy, the Trees, and the Golan Heights