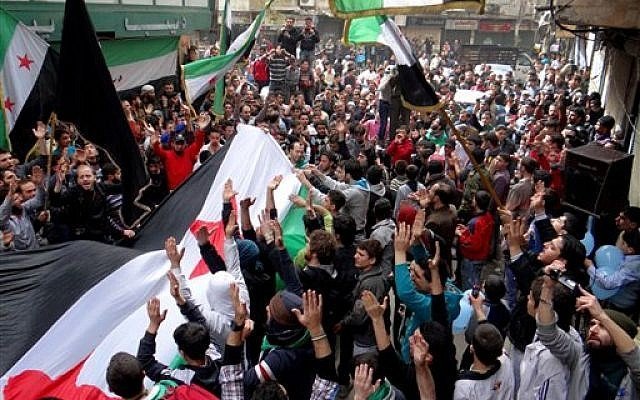 Syrian Transitional Government? No Such Thing

January 21, 2013 12:19 pm 0
Do Not Write Your Memoires Before Obama Writes His
The Nine Dangers Facing Syria
A Loosening Grip

Members of the Syrian opposition reported today that their meeting in Istanbul to elect a prime minster for a Transitional Government, Western backers and Arab nations have been pressing for, failed in its mission to agree on an alternative figure to Assad. As a result, the National Coalition formed a five-member committee to find a way out of the logjam within 10 days. Syrian Transitional Government? No such thing.

Now consider that meaning within an Arab world ruled by either dictatorial families under the guise of a League calling itself The Arab League (Legitimacy by association with The League of Nations, the old name of the United Nations) or para-military organizations that consider themselves outside the rule of law like Hamas, Hezbollah, The Mahdi Army, etc, etc, etc.

Consider also that temporary access to power within the context of competing Arab States or competing ideologies. As in Qatar competing against Saudi Arabia (especially in Syria). So are the Saudi Wahabbis competing against the Egyptian-founded Muslim Brotherhood. As well as the “resistance” camp under the banner of the IRGC of Iran competing against anyone who refuses to adopt it. Further to that are the remaining weaklings of liberal, Socialists, or Ba’athists competing against each other and the religious MB.

There is no such thing as a Syrian Transitional Government. Whomever is “chosen” by the Syrian opposition, which was hand-picked by PM Erdogan, the Qataris, and the Saudis, will be just another dictator. He will take over to begin the process of following in the footsteps of Morsi of Egypt.

If the Syrian opposition elects a prime minister who is even remotely associated with the MB or does not have the strong personality to tame the MB, the minorities of Syria will keep fighting with Assad. Therefore, it behooves the West to twist some arms. The Syrian opposition, for two important reasons, has no business meeting in Istanbul. Istanbul represents a slice of history the Orthodox Church sees as history repeating itself. It is also the city that rocks and nurtures the cradle of the Muslim Brotherhood.

If the West fears the stigma of an opposition labeled as foreign-induced, it is as foreign as Istanbul. A city in a country we share our history with, but not origins or language.

Syrian Transitional Government? No Such Thing