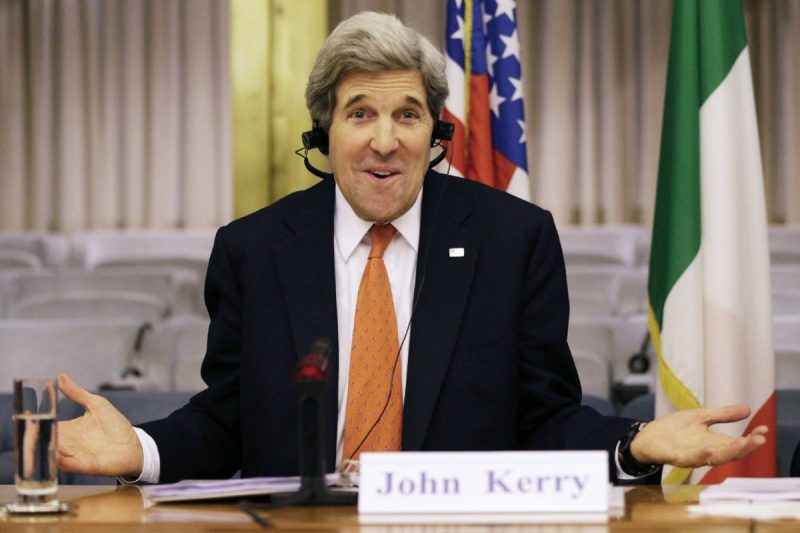 What the Syrian Opposition Must Ask Kerry

February 26, 2013 8:37 am 0
Diplomatic Solution for Syria is Impossible Without Assad on Trial
Select the Candidate Whose Advisers Are Known Commodities
Charge Gulf States Ten Percent of Oil Output for Their Security. Half Should Go to Israel.

As I was writing the Blog titled “Whom Have Kerry and Lavrov Forgotten to Invite to Dinner?”, two important things happened at the same time that are consequential enough to explain Assad’s offer for a dialogue with the opposition seem more like a ploy than real. This is what the Syrian opposition must ask Kerry,

First, Secretary Kerry, after meeting w/Foreign Secretary Hague, used the platform of their press appearance to support the Syrian people with passionate words I have never heard him say before.

It is pretty hard to understand how, when you see these Scuds falling on the innocent people of Aleppo, it is impossible to take their notion that they are ready to have a dialogue very seriously.

Is this a new page the US is turning to help the Syrian people defeat Assad? Or are we watching a Hollywood cry baby production by John Le Kerry?

It may be the kind of words Kerry needed to say to get the Syrian opposition to meet with him after threatening to boycott the “Friends of Syria” conference to be held in Rome (Kerry’s first).

Its threat came on the heels of watching SCUDS fired by Assad against the civilian population. At the same time that the Patriot Missiles in Turkey remain mute and real US aid remains elusive. In my opinion, the Syrian opposition had every right to boycott Secretary Kerry given the tepidity of Obama’s policy on Syria.

Personally, I still have my doubts there is a new policy on Syria. This may explain the reason why Syrian FM al-Muallem, after meeting w/Lavrov, announced an offer for a dialogue with the Syrian opposition. It is just a ruse to understand whether Washington has a new Syrian policy in place.

The second important thing that happened since my Blog entry are two articles published by Michael Ledeen in PJ Media and the NY Times both detailing how arms are being shipped to the more “secular” elements in the FSA via Jordan. Whether the Saudis, mentioned as the source in the NY Times, have decided to take this initiative on their own or with Washington’s blessing is still a mystery. The NY Times mentions that a Croatian Official visiting Washington offered to sell the large stockpile of weapons Croatia possesses to help the Syrians but the Obama Administration declined the offer.

It is important to note here that the weapons the FSA is receiving can defend against armies but are useless against the MIGs or the SCUDS Assad has at his disposal. They are not a game-changer.

The good news in all of this is that Jordan, rather than Turkey or Qatar, is involved in shipping the weapons and their destination are not the Islamists but the more moderate forces my hope will govern Syria after Assad.

The above is what the Syrian opposition must ask Kerry. Some Islamists who will read this Blog will do all they can to thwart any such efforts. All the reasons why they should be implemented.

What the Syrian Opposition Must Ask Kerry