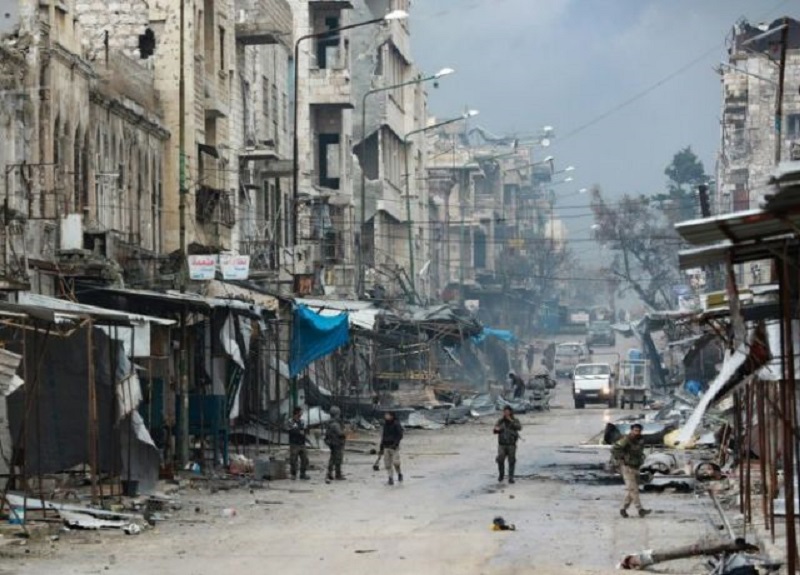 Supported by Turkish artillery fire, Syrian opposition fighters drove Assad troops out of Saraqeb, a key town in Syria’s northwest, only hours after the Assad soldiers fought their way in on Wednesday.

The government attack came despite threats by Turkey’s president to use force if Syria’s army doesn’t pull back by the end of the month. It followed just days after rare and direct confrontations between Turkish and Syrian troops inside Syria. The clashes killed 20 soldiers.

The town, Saraqeb, sits at the intersection of two major highways, which link Damascus to the north, west, and east of Syria.

Later Wednesday, observers reported clashes inside the town between Assad troops and opposition fighters. Turkish troops stationed north of Saraqeb shelled Syrian troops north and west of the town. The opposition counterattack successfully pushed Syrian troops back to the southern edge of town.

Assad’s forces have made advances into Idlib, the country’s last rebel stronghold, since December. They have fought to open the Damascus-Aleppo highway, which rebels have kept shut down since 2012. Saraqeb is the last major rebel-held town in their way.

Turkey is a strong backer of some rebel groups in northwestern Syria. It has a dozen military observation posts in Idlib, set up as part of an agreement reached in 2018 with Russia. The observation posts monitor a cease-fire that has since collapsed.

In recent days, Ankara has sent new troops and equipment, setting up new posts around Saraqeb in an attempt to keep it from falling into Syrian government hands.

If the (Assad) regime does not retreat to areas behind the observations posts, Turkey will be forced to take matters into its own hands.

He spoke after the unusual clashes Monday in which seven Turkish and dozens of Assad forces died. The Turkish people support Erdogan’s actions because they don’t want to see a new influx of Syrian refugees enter Turkey. Already, Turkey is home to 3.5m Syrian refugees.

Erdogan said he told Russian President Vladimir Putin during a late-night phone call Tuesday that the Syrian forces must retreat to a point agreed on in a 2018 cease-fire agreement.

Russia and Turkey agreed to a demilitarized zone in Idlib. Supposedly both Ankara and Moscow would use their forces to enforce a cease-fire and clear the highways restricted by rebel control. That cease-fire and subsequent truces didn’t survive repeated bouts of violence.

This is a new era in Syria. Nothing can remain the same where the Turkish soldier’s blood has been shed. If our soldiers’ safety cannot be ensured in Idlib, no one can deny our right to ensure it ourselves.

It was not clear what happened to the Turkish observation point or its soldiers. There was no immediate comment from Turkish officials.

The United States, Britain and France requested an emergency U.N. Security Council meeting on the escalating situation in northwestern Syria. The open meeting is expected to take place Thursday. It will include a briefing by the U.N. special envoy for Syria, Geir Pedersen, and U.N. humanitarian chief Mark Lowcock.

The United Nations warned Wednesday that the humanitarian situation in the northwest was deteriorating.

Some 586,000 people have been displaced since Dec. 1. Further, over 100,000 others are “facing an immediate risk of displacement,” U.N. spokesman Stephane Dujarric said.

He said many of the displaced fled with only the clothes on their back. Their need for food, shelter, water, and sanitation are urgent priorities. A humanitarian plan for the next six months to help up to 800,000 people in the northwest is seeking about $336 million, Dujarric said.