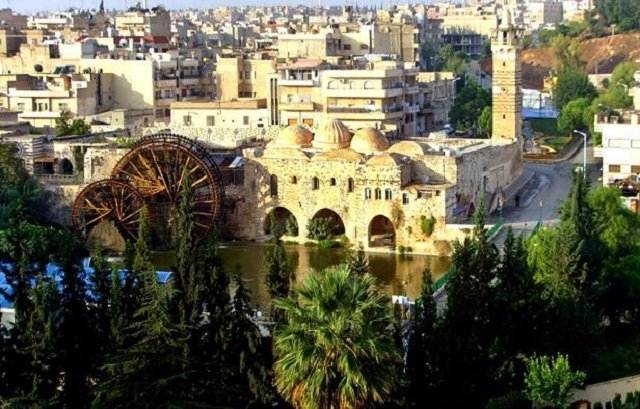 September 16, 2015 9:44 am 0
Russian Troops Geolocated in Aleppo, Hama, and Homs
What a great man Barack Obama is
The Arab Curse

A large convoy arrived in the central Syrian city Monday from Latakia.

Russian personnel accompanied by a convoy of equipment have reportedly deployed to Hama in the latest sign of Moscow’s growing military buildup in Syria.

On Monday, opposition a large convoy arrived in the central Syrian city from Latakia, where the US says recent Russian moves indicate they are planning to set up “a forward air operating base.”

A Syrian newspaper close to the regime reported the convoy had transported Russian food and relief aid, while anti-Damascus outlets said Russian military officers and equipment had been sent into Hama.

An activist from Hama said he had received “information about the arrival of a delegation consisting of Russian officers and experts accompanied by the [Syrian] Defense Minister Fahd Jassem al-Freij [Monday] at Hama’s Al-Nawair Hotel.”

“The area around the hotel has seen a heavy security presence by regime forces, which have cordoned off the Real Estate Interests Building and closed the street leading to the hotel.”

In turn, Al-Souria Net’s correspondent in Hama said that regime forces had closed off all roads leading to the city’s central Al-Aasi Square.

The correspondent added that the city had seen a heavy deployment by security forces and an increase in the number of impromptu checkpoints, as well as car and pedestrian searches, and ID checks.

Another media activist from the city said that some areas near the hotel had been reopened late on Tuesday morning.

“Today after 10:00 am, pedestrians were allowed access to the roads near the hotel where the Russian delegation is [staying],” the activist who identified himself as “Saifeddin” told the outlet.

“The street leading to the hotel is [still] completely closed.”

“Several military vehicles can be seen and anti-terrorism forces, military police and the so-called ‘Desert Hawks’ militias are deployed in the area.”

Meanwhile, All4Syria reported that 15 buses packed with armed Russians had been spotted entering the Equestrian Club in southeastern Hama.

“The Equestrian Club has become a barracks for Russian nationals,” an activist told the pro-rebel outlet.

The pro-regime Al-Watan newspaper also reported on the convoy, but insisted it had transported a consignment of the humanitarian aid that Russia claimed it flew into Latakia on Saturday.

Hama Governor Ghassan Khalaf told the daily that 15 tons of aid had been trucked into Hama, including “various foodstuffs as well as kitchen utensils and equipment.”

Russia in recent weeks has been conducting a major military buildup in Syria amid a flurry of reports that Moscow is preparing to set up an airbase in the Latakia province to conduct airstrikes on behalf of the Bashar al-Assad regime.

AFP last Wednesday reported that Russia’s military activities have centered on the Bassel al-Assad International Airport south of the coastal city of Latakia.

The next day, Israel’s defense minister told reporters that Russian troops and technical advisors have been arriving in the country “for operating planes and combat helicopters.”

US Secretary of State John Kerry had earlier called his Russian counterpart, Sergei Lavrov, to express his concern over the reports, while NATO secretary general Jens Stoltenberg said a Russian buildup “will not contribute to solving the conflict.”

Moscow has downplayed the reports, with Lavrov saying Thursday that Russia’s arms shipments were merely the fulfillment of contracts with the Syrian government while its military trainers had been in the country for “many years.”