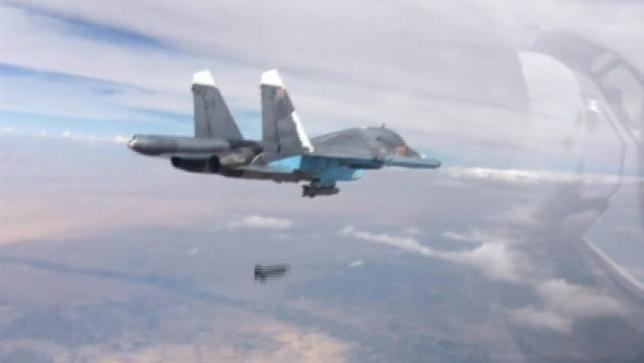 Islamic State fighters have seized villages close to the northern city of Aleppo from rival insurgents, a monitoring group said on Friday, despite an intensifying Russian air-and-sea campaign that Moscow says has targeted the militant group.

News of the advance came as the United States announced it was largely abandoning its failed program to train moderate rebels fighting Islamic State and would instead provide arms and equipment directly to rebel leaders and their units on the battlefield.

In the meantime, as ISIS wins on the battlefields in the North, Russia ignores ISIS in Aleppo and instead concentrates its firepower on the moderate Free Syrian Army.

Russia said on Saturday it had stepped up its bombing campaign against Islamic State militants in Syria, while local observers said several of the air strikes had hit areas in western Syria where the hardline group has little presence.

Russia, a top ally of psychopath Baschar al-Assad, started bombing in Syria on Sept. 30 saying it was targeting Islamic State and other opposition groups, a campaign that has drawn Moscow deeper into Syria’s more than four-year-old conflict.

Rebels on the ground and Western states have said Moscow’s air campaign, which has been combined with ground attacks by pro-government forces, have mainly targeted rebel groups not associated with Islamic State, including U.S.-trained fighters.

As Mohamed Chebarro said in his Op-Ed, “Assad, ISIS and Russia: A symbiotic relationship of destruction“, for al-Arabiya:

ISIS’s destruction of historic monuments, and Assad’s killing his own people, are two sides of the same coin.. . There is nothing better than ISIS to promote indirectly what the regime has been preaching since the start of the Syrian uprising: either the regime, or terror in Syria and the region. Throughout the conflict, Syrians – most of whom are Sunni Muslim – have been victims of both ISIS and the regime’s many killing machines, be it the army or domestic and foreign militias.

Russian bombing campaigns is testament to this truth. Russia wants to protect ISIS, not destroy it. This is why Russia ignores ISIS wins in Aleppo.

How to Destroy a Synagogue and Claim to Protect it
Go Ahead President Obama, Make Jihadists in Syria
Diplomacy in a World of Extreme Violence
Putin Terror 436