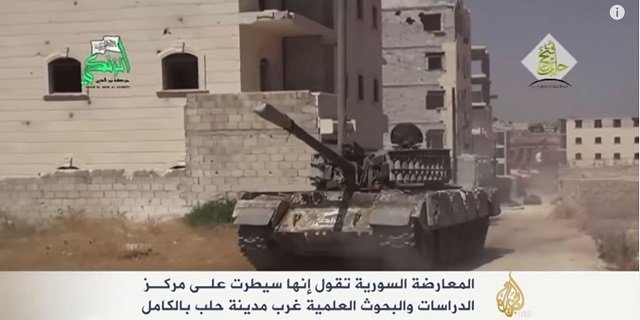 July 4, 2015 10:04 am 0
Iranian General Was Killed by ISIS Near Aleppo
A Note from an Australian Surgeon
Too Much Arab Talk When Action to Save Aleppo is Needed

Activists on the ground said a coalition of rebel groups had taken the Scientific Research Centre, which was being used as a military barracks. This small battle victory opens potential lines of attack against several other government-held neighborhoods.

The alliance of rebels is one of at least two coalitions of opposition fighters that have begun a major operation against government-held districts in Aleppo in recent days.

Aleppo, once Syria’s economic hub, has been divided between the government in the west and rebels in the east since shortly after fighting there began in mid-2012.

A video (in Arabic-See it below also) shared online showed the capture of the Scientific Research Centre, with fighters from one of the groups raising the three-starred flag of the Syrian uprising.

Regime war planes had carried out extensive raids against the center on Saturday morning, prompting the rebels to evacuate parts of it. Assad forces tried to recapture the center overnight without success.

Elsewhere in western Aleppo, clashes continued between rebels from Ansar al-Sharia and Assad loyalists around the Zahra neighborhood.

The group began an assault against Zahra and several other regime-held districts Thursday night, advancing slightly before being pushed back Friday night, as government planes carried out around 40 air strikes.

At least 29 Ansar al-Sharia fighters were killed Friday, No details are available on deaths among regime forces.

Also Saturday, activists on the ground said the number of Al-Nusra Front fighters killed a day earlier in an explosion in a mosque in northwestern Syria had gone up to 31.

An initial toll of 25 had been given for the blast, which hit a mosque during Ramadan prayers in the town of Ariha in Idlib province.

Civilians were among the worshipers, but there was no immediate confirmation of civilian deaths as Syrian moderate rebels gain ground by occupying the Scientific Research Center.