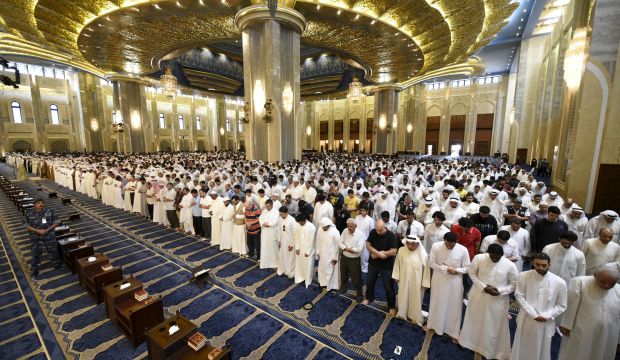 July 4, 2015 5:35 pm 0
Americans Behind Destabilizing Bahrain?
Who is Protecting Assad Inside the Arab League?
Al-Qaeda in Syria

TFS Note: This sectarian unity is unique to Arab Muslims. The moment non-Arab Iranian Mullahs, Barack Obama is rewarding with a detente and the freedom to terrorize at will in the Middle East, interfere in Arab countries and politics, divisiveness and death ensue. Bravo Kuwait and Bahrain.

Kuwait City and Manama, Asharq Al-Awsat—Sunnis and Shi’ites held a joint prayer in Kuwait on Friday in a gesture of solidarity one week after an attack on a mosque left dozens killed and injured.

Hundreds of members of both sects have gathered at Kuwait City’s grand mosque to show national unity in the wake of last week’s attack that killed 27 people and injured 227 at Imam Al-Sadiq Mosque.

Kuwait’s Emir Sheikh Sabah Al-Ahmed Al-Jabir Al-Sabah was among those attending the prayer along with other senior officials.

Authorities have identified the attacker as a 23-year-old Saudi national who flew to Kuwait hours before he carried out the bombing.

Islamic State of Iraq and Syria (ISIS) has claimed the attack.

Sunni and Shiite Muslims also prayed together at a Shiite mosque in Bahrain on Friday.

“Wherever they go in Bahrain, extremists will always find themselves in isolation,” he said.

A similar prayer will be held at a Sunni mosque in Bahrain next week.

Meanwhile, Gulf interior ministers on Friday agreed during an emergency meeting in Kuwait to coordinate efforts to counter attacks on mosques in the region.

The ministers expressed their countries’ solidarity against terrorism and the risks it poses to security and stability, calling for mores steps to confront “this serious epidemic.”

You kill Americans you pay a hefty price
Why Qatar Will Fall
Americans Behind Destabilizing Bahrain?
Things That Matter 367