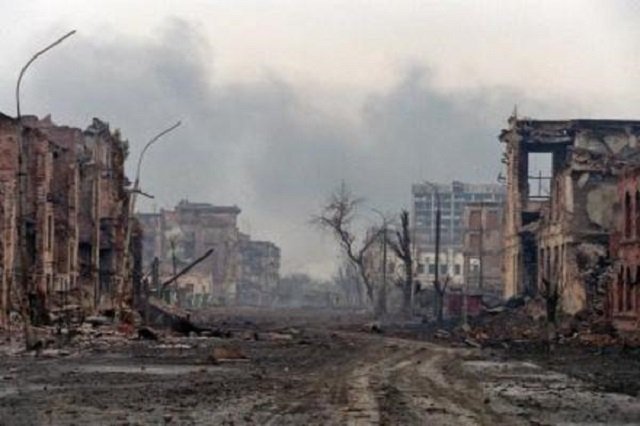 Will Turkey Permit Putin to Destroy Aleppo Like He Destroyed Grozny?

February 20, 2016 5:34 am 0
Russia Ignores ISIS in Aleppo, Concentrates on Moderate Rebels
Barrel bombs dropped on Aleppo
What Use is Killing Bin Laden if Policy Grows Another 100?

A single road, like a fragile umbilical cord, connects rebel areas of Syria’s second city Aleppo with international relief from Turkey. Those who remain are stockpiling arms and supplies — bracing for Putin’s air campaign of destruction. Will Turkey permit Putin to destroy Aleppo like he destroyed Grozny?

In the Turkish city of Gaziantep, charities are preparing to send aid south of the border to a Syrian city where 250,000 to 300,000 people are still living despite the relentless violence, too poor to escape or too invested in the fighting’s outcome to run away.

“The siege by regime forces is not yet a done deal,” said Assad Al-Ashi, head of the NGO Baytna Syria, adding that one road to Aleppo’s west remains open.

“But it is under fire from all sides so it is still dangerous. It can be cut off at any moment,” he said.

“Preparations are in full swing to get ready for a full siege,” Ashi added.

“Syrian humanitarian organisations — there are around a hundred on the ground — are stockpiling everything they can inside the city.

“The local council in Aleppo has formed an emergency body to prepare for the siege. In the event of a total siege, Aleppo could last for a year, probably more,” he estimated.

Bombardment by bombardment, strike by strike, fears that the city faces complete encirclement have taken hold, with thousands of civilians displaced by the fighting.

Insurgent groups can still reach the other rebel stronghold of Idlib in the northwest. From there, the Aleppo fighters have stockpiled hundreds — perhaps even thousands — of tonnes of weapons and provisions like flour, oil, sugar and medical supplies.

The siege of the southern city of Homs — where the rebels held out for three years before finally surrendering — provides a grim example of what Aleppo could face.

“But Aleppo won’t be like that. The rebel zones are much larger and better defended. They are building trenches and tunnels so they can continue to move around. The siege will never be completely watertight.”

Many hospitals and clinics, often targeted by air strikes to demoralize civilians and fighters, have been moved to basements, as have some schools.

“Doctors who had to leave, left. Those who stayed know what’s coming and are willing. It’s their choice,” he said.

One city keeps popping up in conversations: Grozny, the capital of Chechnya. The city was completely destroyed by Moscow in the 1990s during the Chechen wars. Will Turkey permit Putin to destroy Aleppo like he destroyed Grozny?

“Bashar is ready to destroy everything if necessary to secure a victory in Aleppo. But he doesn’t have the means, nor the soldiers to do it. You’d have to obliterate it, like Grozny. Will the Russians agree to that?”

Ashi said he expects the front to remain open for “20, or 30 years”, adding that the rebels are ready to do whatever is necessary to keep it open, and that the Turks are ready to help.

The International Committee of the Red Cross (ICRC) said Friday that it was “deeply alarmed” by the situation in Aleppo.

And after a massive exodus of refugees now stuck at the Turkish border, Amnesty International criticised Turkey for refusing entry to some injured Syrian civilians fleeing the fighting, describing its policy as “appalling”.

Bareesh said he believes Russia will continue its strikes, even to the point of Grozny-level destruction.

Will Turkey Permit Putin to Destroy Aleppo Like He Destroyed Grozny?

The Cleverest Move Yet by Ambassador Robert Ford
How to Destroy a Synagogue and Claim to Protect it
Russia Ignores ISIS in Aleppo, Concentrates on Moderate Rebels
Putin Terror 436 Syria News 1213