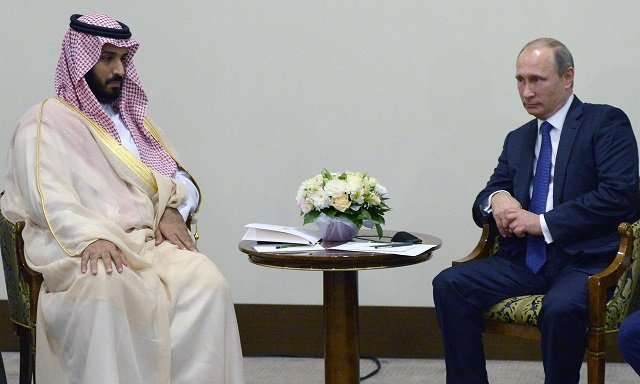 March 5, 2016 7:25 pm 0
Putin Is Looking For a War Against Turkey
Vladimir Putin sent Russian mercenaries to fight in Syria and Ukraine
Obama and Putin Divulge Their Deep Secret to Falafel

Saudi Arabia was willing to lose oil customers in return for losing Assad and the Iranian influence in Syria. One would assume that Saudi Arabia is still a willing partner, but not if Russia continues on its path of no return.

The agency said on Friday that it placed Russia’s Ba1 debt rating on review for downgrade, pending a two-month review of the government’s policies.

Of the three major rating agencies, Moody’s, Standard and Poor’s and Fitch, only the latter keeps Russia’s debt rating in an investment grade, although only a notch above junk.

“Moody’s assessment indicates the need to adapt the budget system to the new reality in the commodities market,” Siluanov said.

Oil and gas receipts produce about half of Russia’s revenues and falling oil prices threaten to increase the budget deficit, now envisaged at 3 percent of gross domestic product this year if oil averages at $40 per barrel, according to a finance ministry forecast. The decline in oil has also knocked the Ruble sharply.

The country’s budget, which still assumes an oil price of an average of $50 per barrel this year, is to be amended next month. The Russian Central bank sees oil at $35 on average this year.

“Given pressures on the government’s finances, Moody’s sees risks that the government would become overly reliant on a weak currency to offset the lower oil prices or else resort to central bank financing, both of which would keep inflation at relatively high levels and threaten the recovery of the domestic banking system,” Moody’s said in its statement.

Siluanov said the government was already hard at work on how to mitigate the impact of lower crude.

“The Russian government has already prepared rapid-response measures to the current economic situation and is working on how to balance the budget in the medium term,” Siluanov said.

Plans include expenditure cuts, hikes in excise taxes and further tightening of tax enforcement. But Moody’s said this might not be not enough and that more radical reforms to Russia’s fiscal regime, such as pension reform, might not happen soon. Putin’s adventurism in Syria taxes his economy.