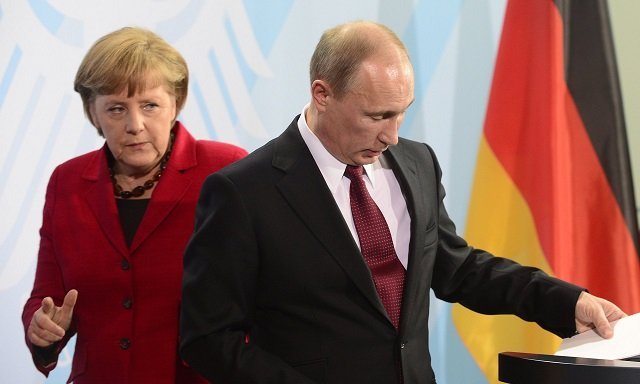 Russia is trying to topple Angela Merkel by waging an information war designed to stir up anger in Germany over refugees, Nato’s most senior expert on strategic communications has claimed.

The attempt to provoke the removal of the German leader, who has been a strong supporter of sanctions against Vladimir Putin’s regime, is said to have been identified by Nato analysts.

J?nis S?rts, director of Nato’s Strategic Communications Centre of Excellence, based in Riga, Latvia, told the Observer that Russia had a track record of funding extremist forces in Europe, and that he believed there was now evidence ofRussia agitating in Germany against Merkel.

Insisting that he could talk only as an expert, and not as a spokesman for Nato, S?rts said: “[Russia] is establishing a network that can be controlled. You can use it as they have tried to do in Germany, combined with the legitimate issue of refugees, to undercut political processes in a very serious way. Angela Merkel has been a very adamant supporter of continued sanctions against Russia If it was just punishment, that would be OK – but it is testing whether they can build on pre-existing problems and create a momentum where there is political change in Germany.

“I think they test whether they can – in such a big country, with not so many vulnerabilities in normal times – actually create a circumstance through their influence where there is a change of top leadership. They are using Russian speakers, social media, trying to build on the existing faultlines. Use the far right narrative and exploit that.”

S?rts, who has access to intelligence briefings, added: “In general terms, you can trace Russian funding to the extreme forces in Europe. Either left or right – as long as they are extreme, they are good to come into the Russian picture as of possible use in their tactics.”

More than 1 million refugees – many from war-torn Syria – have arrived in Germany over the past year, many attracted by Merkel’s claim that she would not put a limit on the number who could settle in the country.

The movement of people has fed the rise of the rightwing populist party Alternative für Deutschland, with a recent poll suggesting 81% of German citizens believe Merkel has lost control of the situation. Voter sentiment will be tested for the first time since the crisis on 13 March, when elections are held in three of Germany’s 16 regions – Sachsen-Anhalt, Rheinland-Pfalz and Baden-Württemberg.

S?rts, who before his Nato appointment last year was the most senior civil servant in Latvia’s ministry of defence, said that the impact of Russia’s attempt to stir up unrest in Germany was being diminished because the problem had been discovered, but he warned that other countries were turning a blind eye to Putin’s propaganda war.

He said: “We saw it in Germany. The best misinformation tool is when your opponent doesn’t notice. That is when it is most effective. I would submit that there are a number of countries who have not yet noticed, or have chosen not to notice.”