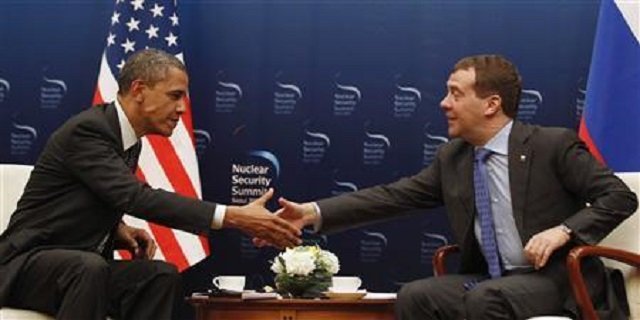 Remember when President Barack Obama was caught on camera assuring outgoing Russian President Dmitry Medvedev that he will have “more flexibility” to deal with contentious issues after the U.S. presidential election?

Does anyone believe the story below Reuters just published that mimics concern but whose purpose is for Obama to help Putin seal Syria’s fate the way Barack Obama helped Iran seal it?

The United States opened the door on Thursday to possible tactical discussions with Russia about the war in Syria, as Moscow’s deepening military presence raised the prospect of some limited coordination between the former Cold War foes.

The White House said it “remains open to tactical, practical discussions” with Moscow. The Pentagon acknowledged that such talks might be necessary to avoid “miscalculation,” although it was unclear when or under what conditions they might take place.

The United States, on paper, fiercely opposes Russia’s support for Baschar al-Assad, but in reality Obama is not interested in maintaining any U.S influence in the region. Obama will help Putin seal Syria’s fate though.

One U.S. official told Reuters on Thursday that the United States believed as many as 500 Russian troops were now at the airfield, an increase from a previous estimate of about 200.

“We want to avoid miscalculation. We want to avoid problems,” Pentagon spokesman Peter Cook told a news briefing. In other words, the Pentagon is not interested in telling Russians to get out of Syria.

On September 11, Russia called for military-to-military cooperation with the United States to avert “unintended incidents” as it stages navy exercises off the coast of Syria, where U.S. officials believe Moscow is building up forces to protect Baschar al-Assad.

Does anyone believe Obama is not helping Putin seal Syria’s fate? Obama wants Syria off his agenda and off the map if he could.

Obama’s big prize is Israel. Putin, like Khamenei, helps him reach his lifelong goal of destroying the Jews in Israel.

Obama is only responding to Russian demands to cooperate to avoid “unintended incidents” and not to limit Russian expanded military operations in Syria.