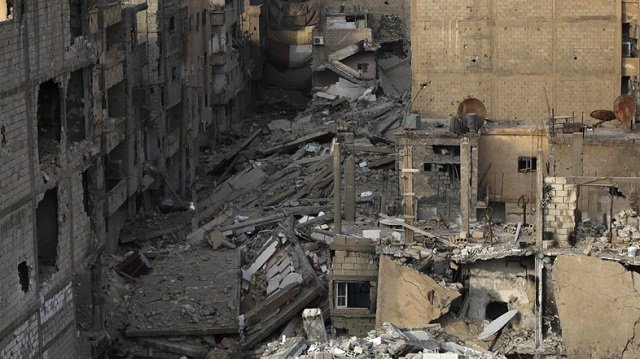 Syrian activists and the Islamic State of Iraq and Syria (ISIS) group say the militants have seized a district previously held by Syrian troops in the eastern city of Deir el-Zour.

The industrial district of Deir el-Zour fell to the group late Wednesday following an attack and fierce clashes between the two sides. While Putin kills civilians, and he ignores ISIS, the terror group scores more gains on the ground.

The ISIS-affiliated Aamaq news agency said Thursday that the group began its attack on the district with three successive suicide operations that struck Syrian army outposts inside.

The city in the country’s east is held mostly by ISIS but Syrian troops control a few districts inside and the Deir el-Zour airport on the outskirts of the city. Russian policy to destroy the moderate opposition while ignoring ISIS is going back to haunt the world one day soon. What good is Syria if all is left are terrorists on both sides?

Hundreds of families of ISIS militants and some injured fighters are expected to leave rebel-held areas in southern Damascus under a U.N.-brokered deal, a monitor said on Thursday. The safe passage would be given from the Palestinian refugee camp of Yarmouk on the outskirts of Damascus and neighboring Hajar al Aswad.

The families and some fighters will be taken to the ultra-hardline militant group’s stronghold of Raqqa in northern Syria and other ISIS-controlled areas over several months, ultimately ending the group’s presence in areas near the Syrian capital.

Obama Told Lawmakers Criticism of His Syria Policy is Horseshit
How to Beat ISIS: First Deal With Assad
1000 Russian Muslims joining ISIS to fight in Syria and Iraq
Putin Terror 436